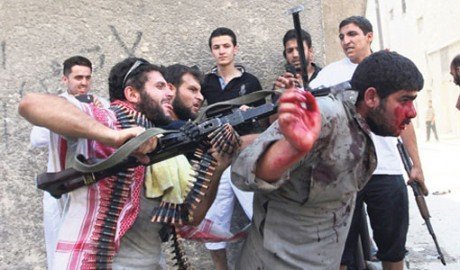 In Syria, the enemy of our enemy is still our enemy

April 6, 2015 1:13 pm 0
The bastards are stoning our women
Who is funding terror?
Rebels battle al-Qaeda-affiliated fighters across northern Syria

It’s as if they’re trying to outdo each other and set new historic records for cruelty.

It’s as if the horrors that “total war” and totalitarianism produced in the twentieth century were not enough.

The regime of Syrian dictator Bashar Assad and the Islamic State have been devising ever more brutal and extreme means to achieve their ends. They are both quite literally inhumane. In spite of their mutual enmity, they share a nihilistic “will to power” and utter contempt for political freedom and human rights.

Both use torture and terror as primary weapons; commit mass murder and rape; kidnap and abuse children; use weapons of mass destruction on civilians; scorch and bomb entire regions and populations; and brutalize political and religious groups. In their view, a human being is not a human being — not worthy of human sympathy or dignity — unless he or she is servile, a pawn in their deadly aims. No child, woman, man, village, town or historic site is spared.

Saddest of all is the catastrophic loss of life, and the displacement and traumatization of millions of people. Human Rights Watch reports that Syrian jets drop incendiary bombs with napalm-like fuel that causes horrific injuries, and that children are suffering severely. Evidence indicates that Syria and the Islamic State both use chlorine-based chemical weapons. Starvation and disease compound the tragedy. Indeed, one of Assad’s methods is to starve blockaded neighborhoods into submission.

Islamic State abominations make headlines every day. But we must recall Assad’s own merciless bellicosity.

Recall that the Syrian rebellion began with peaceful pro-democracy demonstrations, and only grew violent in response to Assad’s atrocities. Activists organized in 2006 under the Damascus Declaration’s National Council — a collection of pro-democracy groups. They wanted human rights, free elections, an independent press and judiciary, and an end to the hated Emergency Law.

When protestors poured into the streets in 2011, Assad shot them down. When protests grew in response, Assad initiated massacres, arrests, kidnappings and torture — even of children. When brutality further fanned the flames of revolt, Assad employed cluster bombs and attack helicopters on rebels and civilians alike.

In spite of the regime’s relentless assault, by mid-2012, the Syrian regime was, in the NATO Secretary-General’s words, “approaching collapse.” Rebels had gained significant territory and their numbers were steadily increasing. Assad had earned the hatred of so much of the populace that his overthrow seemed a matter of time. With momentum on the rebels’ side, England, France, Turkey and Saudi Arabia urged concerted aid to the Syrian resistance — but the U.S. rejected ideas such as a no fly zone, a humanitarian corridor, and supplying arms to vetted rebels.

In the meantime, the chaos created by the Syrian War, and the vacuum created by the feeble U.S. and United Nations response, opened the door to Syrian allies Russia and Iran, and to extremist groups eager to hijack the Syrian revolt.

The radicalization and escalation of the conflict suited Assad well. Invigorated by jihadi-caused setbacks to moderate rebels, and by the Free Syria Army’s failure to procure viable aid, Assad amplified his reign of terror. In 2013, he unleashed chemical weapons on suburbs of Damascus. Since then, American-endorsed Russian “peace plans” have come and gone, all of them buying the regime time.

How masterfully Assad has used that time to his advantage. He has regained ascendancy, and positioned himself as a bulwark against extremists.

We shouldn’t fall for Assad’s propaganda. He, like the Islamic State, is very good at it. Assad presents the Syrian regime as the only force that can counteract Islamist extremism. But the enemy of our enemy is not really the enemy of our enemy. Rather, both the Syrian regime and the Islamic State are enemies of us — of everything we supposedly stand for, of the liberal-democratic tradition itself.

In Syria, the enemy of our enemy is still our enemy

Bloody Hell It Hurts to Watch Assad Terrorize
Why Al-Qaeda is Not Seeking Assad’s Death?
The head of the snake
Opinions 1017 Syrian Revolution 1335