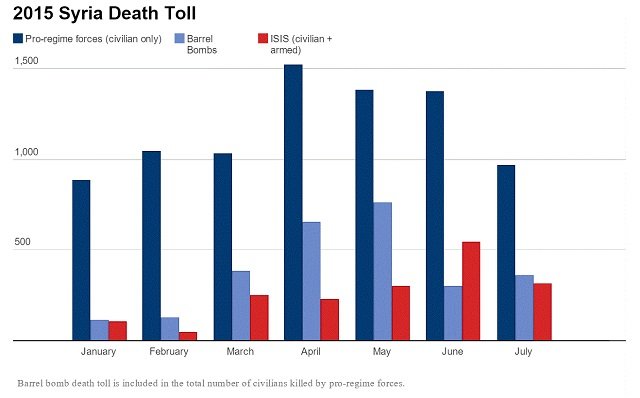 The sound of terror in many areas of Syria is the distant whirring of a regime helicopter, followed by what Khaled al-Homsi, a Syrian opposition activist, describes as a “horrifying strong wind” as the helicopter releases an explosives-filled barrel. Civilians in surrounding areas have 40 seconds to hide while the barrel free-falls from the sky — but with no idea of where the explosive will land, all they can do is wait.

“Everybody can see it, but they don’t know where it is going to be dropped [or if] it’s going to hit them, or their neighbors,” Al-Homsi, the 32-year-old media activist from the ancient city of Palmyra, a central Syrian city now controlled by the Islamic State group, told International Business Times. “They simply wait to see whether they will die.”

In June, the group also known ISIS arrested Al-Homsi for aiding the Syrian opposition, but even this encounter could not compare to the frequent sound of a helicopter chopping through the air above his hometown. He has survived 15 barrel bomb attacks carried out by Bashar Assad’s regime. In a country teeming with lethal actors like ISIS and al Qaeda, the regime’s  barrel bombs kill more civilians than the two groups combined.

“There is great danger for civilians from the Syrian army, the militias who are fighting with them and ISIS,” Khaled Khatib, a photographer with the Aleppo branch of the Syrian Civil Defence, a volunteer rescue organization. “But the weapon that kills the most Syrians — by 90 percent — is the barrel.”

Barrel bombs are homemade explosive devices that are dropped from helicopters flying around four miles from the ground — there are two types of barrels frequently used in Syria and each one can weigh between 440 and 1100 pounds.

The first is a cylindrical container, usually an oil barrel or gas tank made of either cement or metal that can reach 5 feet long. The second is a large, square container that has been described among activists as an “explosive dumpster.” This usually consists of a garbage container or water tank that can be almost 10 feet long and 6.5 feet high.

The barrel’s fuse detonates when it comes into contact with another object, propelling any number of scorching hot items, including fuel, TNT, metal fragments, nails, ball bearings and shards of old machinery, into its surroundings.

“Sometimes a 10-story building will be destroyed and shrapnel will reach almost 300 meters,” al-Homsi said. “The barrel make a sound like an earthquake when it hits the ground and the people become terrified.”

The types of injuries received depend on where the bomb lands. Many people die from a direct hit, but as medical facilities are increasingly understaffed and under-resourced, a large number of victims succumb to infection from shrapnel wounds, according to a spokesman for the Aleppo branch of the Syrian Civil Defence.

Syrian activists and human rights monitoring groups accused pro-regime forces of using the weapon for the first time three years ago in Daraa, a southern Syrian province, but only on Aug. 13, 2015, did the U.S. urge the international community to “end the deplorable use of barrel bombs.”

“The Assad regime has apparently grown reliant on the repugnant use of barrel bombs as an instrument of terror against innocent Syrian civilians,” U.S. envoy Samantha Power said in a statement released on Thursday.

Within hours of the U.S. envoy’s  statement, the Syrian regime dropped 12 barrel bombs on the southern city of Darayya and a separate barrel bomb attack hit a neighboring town in the province of Daraa, in which the regime helicopters dropped at least 10 barrels on al-Yahudeh, according to the Syrian Observatory for Human Rights (SOHR).

Barrel bombs and other air attacks have killed, injured and displaced tens of thousands of civilians across Syria, according to an Amnesty International report which concluded that the use of barrel bombs in amounts to “war crimes” and in some cases “to crimes against humanity.”

In February 2014,  more than a year after the homemade explosives claimed their first victims, the United Nations Security Council passed resolution 2139, demanding all fighting factions in Syria stop attacking civilians and cease the use of “indiscriminate employment of weapons in populated areas…. such as the use of barrel bombs.”

The UN resolution has made little difference to the frequency of attacks or the number of areas targeted by the weapons — except to increase them. Almost 9,000 people have been killed in barrel bomb attacks since February 2014 and roughly 95 percent of victims were civilians, according to the Syrian Network for Human Rights.

Aleppo has seen the most attacks and the greatest number of victims since the bombs were first used in 2012. More than 1300 people in Aleppo have been killed in barrel bomb attacks since January 2015, but activists say this number is slightly lower than the fatalities Aleppo suffered in previous years.

One particularly lethal day for Syria’s largest city  was Sept. 3, 2014. Khatib rushed to the site of barrel bomb attack in the city, hoping to rescue injured civilians, when another barrel was released. 47 barrels rained down on Aleppo city that day, killing dozens of civilians and three of Khatib’s colleagues. The team has lost 28 volunteers to barrel attacks. Khatib has been indirectly hit several times, but brushed them off as “light injuries,” compared to what others in the area have suffered.

“They have destroyed the city of Aleppo because of the barrels and killed thousands of women and children,” Khatib said.

Residents in other Syrian provinces have suffered a similar fate as the number of explosive barrel attacks has increased. Hasakah, a northern province where ISIS and Kurdish militants are fighting, has seen 57 attacks since February 2014, but none before. Deir el-Zour — under ISIS siege since June — saw its first barrel bomb attacks little more than a year ago.  Syria’s southern provinces like Daraa and Hama saw attacks triple in number.

Last month, the Syrian regime dropped 2041 explosive barrels, killing at least 368 civilians in six of the country’s 14 governorates.  During that month, Al-Homsi was in the central Syrian province of Homs and said there was an average of five barrels dropped on them every day.

Despite mounting evidence, Syrian President Bashar Assad has repeatedly denied accusations that his forces use barrel bombs on civilians. In an rare in-person interview with the BBC earlier this year, Assad denied the army’s use of explosive barrels, calling it a “childish story that keeps repeating itself in the West.”

But it’s a story with witnesses who are willing to speak out — barrels,  compared to missiles and regular Syrian regime bombs, are according to Khatib “less expensive and more lethal,” making them a brutal — and useful — component of Assad’s weapons arsenal.

“People started to wish that they would be shelled with rockets instead of barrel bombs,” al-Homsi said. “ISIS and the barrels both impose a threat, but the barrel’s danger is greater.”