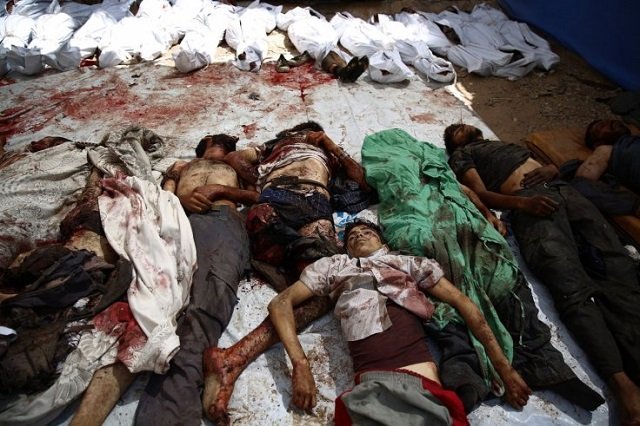 The regime’s bombing of a market in Douma left around 100 dead and hundreds others injured.

A Free Syrian Army-affiliated group has called on US President Barack Obama to look at pictures of the aftermath of the Syrian regime’s barrel bombing outside Damascus that left around 100 civilians dead.

“We just want a few minutes of your time to observe [the pictures] of the Douma massacre,” the Southern Front’s First Corps pleaded in an open letter addressed to the US leader on Monday.

“You may not find pictures of the massacre in your media outlets, since Syrian blood does not carry the importance of ISIS, which is the weaker copy of Assad’s terrorism.”

The Syrian regime on Sunday bombed a market in the rebel-held town of Douma northeast of the Syrian capital, killing approximately 100 civilians and injuring hundreds of others, according to the Syrian Observatory for Human Rights and local activists.

The air raid—one of the deadliest against civilians in the Syrian civil war—sparked widespread outrage among Syrian opposition groups, humanitarian NGOs, as well as the UN’s peace envoy to Syria Staffan de Mistura.

“Hitting crowded civilian markets killing almost one hundred of its own citizens by a government is unacceptable in any circumstance,” Reuters quoted the UN official as saying.

Washington, in turn, condemned “in the strongest possible terms the Assad regime’s deadly airstrikes [Sunday] on a market in the Damascus suburb of Douma.”

US State Department spokesperson John Kirby issued a statement that the Douma bombing “demonstrates the regime’s disregard for human life.”

“As we have said, Assad has no legitimacy to lead the Syrian people.”

The First Corps—which is fighting the regime in Syria’s southern Daraa province—stressed in their statement that they were not “even asking [Obama] to take a stance on the victims that that die daily at the hands of the dictatorial forces.”

“We are not sure there are words to describe the horrible crimes that the Bashar al-Assad regime is perpetrating against the Syrians.”