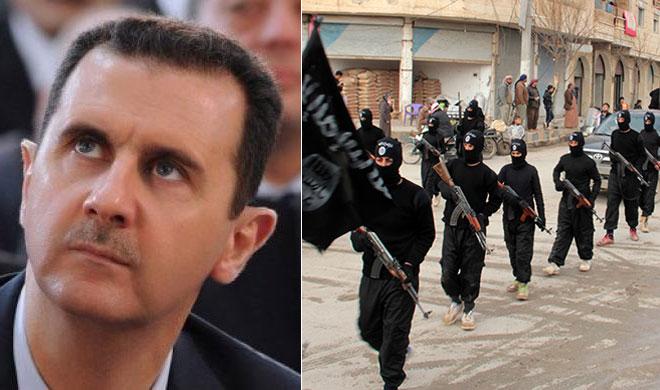 ISIS will go if Iran says so

Consider the ultimate Arab game. It has no rules and one goal: Divert the attention away from one’s weakness. We invented it and we are masters at playing it. We have been diverting the attention towards Israel ever since the Palestinian exodus of 1948.

For a diversionary tactic, ISIS is a dream tool to deflect the attention away from Syria and Iran, from their nuclear programs, and more importantly from regime change. Assad, with Iranian help, forged ISIS for a reason.

It serves both Syria and Iran to maintain the ISIS threat against the West for many years to come. If the West is focused on their ISIS creation, who has the time to change the regimes of the masters of terror? Who has the time to monitor Iran’s nuclear ambitions?

Just Google Syria News and weigh-in the number of stories on ISIS vs. those on the Syrian Qusayr, mountain-deep nuclear facility in Syria. This is how Iran is defeating Obama. The Mullahs threw him a bone after he failed to remove Assad to divert permanently his attention away from their terror. It sure is working.

Moreover, it is working because Secretary Kerry is almost begging Russia to find a solution for Syria. The same country we have slapped sanctions against is the very same one Kerry is begging to help him close the Syria file soiling his legacy. It’s OK should you feel like crying for America here.

Hindsight, Obama’s letter to Khamenei suggesting he will work with Iran on combating ISIS underscores how little our President, and his NSC staff, understand the Arab world. This grotesque ignorance is leading us to the chaos we see in many parts of the region.

If we are sweating bullets fighting ISIS, you had better believe ISIS will go if Iran says so.

Over the past 15 years, Assad tried on several occasions, to kick-start a new terror group inside Syria to serve his needs (Remember Fatah al-Islam?), but ISIS, created with the help of Iran, is his crown jewel. He empowered ISIS to occupy oil fields he no longer controlled and purchased back his own oil to strengthen it.

Anyone who thinks ISIS, now an important global brand of terror, is about to be defeated, think again. Neither regimes will let it happen. ISIS will go if Iran says so.

The same way Syria and Iran fed al-Qaeda in Iraq to terrorize our US troops, both will feed ISIS to threaten the region and to keep us busy. This is why most of Assad’s attacks on the battlefields have been against innocent Syrian civilians, not against ISIS.

Recently Assad has called for cooperation with the West to defeat ISIS. Just another ruse to wrap ISIS like a suicide vest wraps around one’s bare back. Luckily PM Cameron did not fall for it.

On the diplomatic front, Assad is dispatching secret envoys who will find their way to the ears of US allies, and Iran is assisting Hezbollah to go on a charm offensive to showcase how Shia Islam is Reformed Islam because of the untouchable Sunni Ahadith.

The Punch and the Kiss tactic of Iran. Punch the West with ISIS, then send Nasrallah kisses to Saudi Arabia (Ouch), and indirectly to Israel against the unreformed Sunnis.

Iran knows it cannot confront its enemies by constantly antagonizing them. It has to play the roles of friend and foe simultaneously to achieve its goals of total dominance in the region.

ISIS is a dangerous gravity pulling us into another Middle East terror trap, and so far it is working because Obama has the likes of a 37-year old Ben Rhodes, with no past foreign affairs experience, run our US foreign policy. For all it’s worth, Rhodes thinks John Kerry is his deputy.

If we really want to eradicate ISIS, we have no choice but to remove their masters, in Damascus and Tehran, from power. Anyone who believes ISIS will be destroyed eventually if Assad and Khamenei are still in power is a fool.

ISIS will go if Iran says so