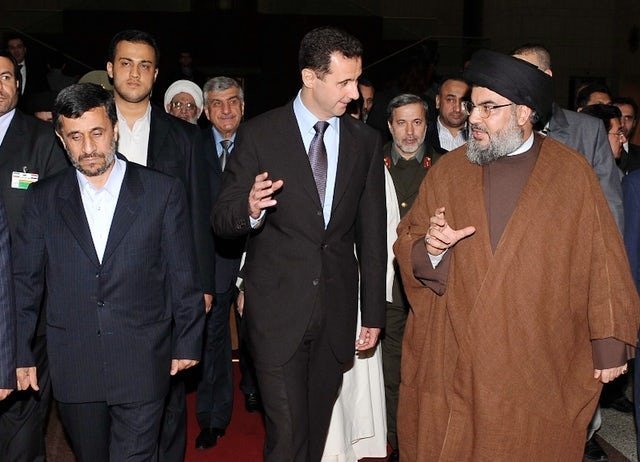 Syrians Are Caught Between Four Evils

October 24, 2015 10:55 am 0
If you are pro-Syria, should you be anti-Israel?
If Egypt Falls, Syria must follow
Americans still clueless about Assad Terror

Syrians are caught between four evils. Each, in its own way, is causing their death and tragic existence.

EVIL OF THE ASSAD REGIME

Evil One of Four Evils – The evil that started it all is the horrific and violent response of the Assad regime to peaceful protesters seeking freedom from his tyrannical rule. It followed with SCUD missiles hitting civilian areas, Iranian snipers targeting pregnant women starving, raping women, gassing women and children in their sleep, torturing in Assad’s jails that killed thousands, ethnic cleansing that resulted in 12 million Syrian displaced (just imagine 160 million Americans homeless to get a sense of what Assad has done), and his indiscriminate barrel bombs specifically conceived to kill as many civilians as possible.

Add to the above soup of tragedy the U.S. air strikes that accidentally kill even more civilians, and the latest Russian air strikes that deliberately target civilians, schools, and hospitals, and maybe your imagination is vivid enough to fully grasp why the Assad evil and the Syrian tragedy are unique. The Syrian people have collectively become the guinea pigs for testing weapons of all kinds, by all means, by almost everyone, all at the same time.

THE EVIL OF WESTERN APATHY

Evil Two of Four Evils – The no-stopping, no-halting, no-blocking, no-controlling of the Assad massacres and crimes against innocent children and women by the Western nations that could. Of the thousands of bullets, missiles, and shells fired in Syria by the West, none touched Assad or the criminals that rule Syria who are intentionally killing civilians and practicing all forms of inhuman massacres. Then we wonder why Islamic terror happens or why ISIS, Jabhat al-Nusra, and al-Qaeda recruit so easily. Does terror help sell weapons?

THE EVIL OF BARACK OBAMA

Evil Three of Four Evils – The refusal to take enough Syrian refugees (bar Germany and Sweden) by the very same countries that were skittish about creating safe shelters for them inside Syria or pressed Barack Obama enough to act to establish no-fly-zones. A good question Europeans should have asked themselves early-on: Which is costlier, a non-fly-zone Saudi Arabia would have been willing to pay the lion share for or the financial burden of providing asylum to hundreds of thousands of Syrian refugees? Next time a war breaks out in the Middle East, do no wait for the likes of Barack Obama who could care less about Europe and its future.

With regard to the Gulf Arab countries, they cannot take Syrian refugees because they have a foreign-worker-to-native ratio of up to 10 to 1. Imagine Israel with 70 million foreign workers serving its 7 million population to get a sense of why Gulf countries have no refugee immigration policy. We are not excusing them. We are stating facts.

THE EVIL OF REFUSING REFUGE TO SYRIANS

Evil Four of Four Evils –  The alarm bells some are sounding about Europe accepting Syrian refugees. To these people, many who were not prepared to support a no-fly-zone safe haven, or the removal of the psychopath Assad, they would rather see the Syrian people die from sarin gas attacks or barrel bombs than see them safe in Europe. If Syrians cannot find safe havens in Europe, they will die. Turkey, Jordan, and Lebanon have accepted, combined, 4 million Syrian refugees, and they are breaking at the seams from the burden. If Europe, with a total population of 742.5 million people provides a refuge for 1 million Syrian refugees, it won’t change Europe’s culture and heritage.

Syrians are caught between four evils each is either constructed by the very same people who want to see Syria destroyed and split apart, or by ignorant people who think Syrians somehow deserve to die.

Grow a heart people. Syrian migrants gave you Steve Jobs, and the iPhone you cannot possibly live without.

Syrians Are Caught Between Four Evils