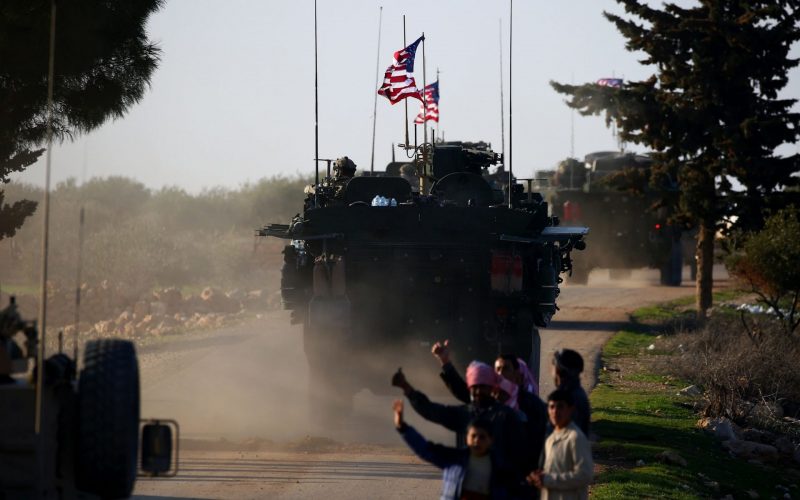 February 23, 2019 6:39 am 0
Assad Alawite Militias Beat Druze Students
Media Has Stopped Publishing the Truth About Assad
It Took US Congress Almost 10 Years to Come After Assad

According to a senior administration official, President Donald Trump keeps half pregnant presence in Syria with 400 U.S. troops split between two different regions. It is a reversal that could pave the way for U.S. allies to keep their own troops in Syria.

Trump had ordered the withdrawal of all 2,000 U.S. troops Syria in December after he said they had defeated Islamic State militants. The abrupt decision sparked an outcry from allies and U.S. lawmakers. It became a factor in Jim Mattis’ resignation as defense secretary.

But advisers persuaded Trump on Thursday that about 200 U.S. troops would join about 800 to 1,500 troops from European allies to set up and observe a safe zone the U.S. and Turkey are negotiating for northeastern Syria, the official told reporters.

About 200 other U.S. troops will remain at the U.S. military outpost of Tanf, near the border with Iraq and Jordan.

Until now, European allies have balked at providing troops unless they received a firm commitment that Washington was still committed to the region.

Despite the reversal, Trump told reporters on Friday “I’m not reversing course” on Syria. He argued the remaining troops would be “a very small, tiny fraction” of the forces who would ensure that Islamic State does not regroup.

Officials said the numbers agreed on this week were not firm and could still change.

“We don’t want to see a resurgence of ISIS,” the official said, using an acronym for Islamic State.

When Trump keeps half pregnant presence in Syria by leaving even a small group of U.S. troops, it would pave the way for European allies to commit troops to help observe a potential safe zone in northeastern Syria.

Marine General Joseph Dunford, chairman of the U.S. Joint Chiefs of Staff, has been in talks with European counterparts about the safe zone in northeastern Syria.

But on Monday, U.S. officials concluded that Europeans would not be willing to go it alone without some American participation, the official said.

The combat-ready U.S. and European forces will help keep the peace between Kurdish forces, who supported the fight against Islamic State, and Turkey, which fears attacks from militant groups, the official said.

The safe zone also will serve as a bulwark against Iran’s influence, the official said.

The United States set-up the Tanf garrison, where the other 200 troops would remain, after the Islamic State fighters controlled eastern Syria bordering Iraq. But since then, Tanf has assumed a role as part of a U.S. strategy to contain Iran’s military buildup.

“Yesterday I asked the president for a couple hundred – he said yes,” said the official, who spoke on condition of anonymity.

“It’s not a firm number, and the president understood that when we asked him,” the official said.

As Trump keeps half pregnant presence in Syria, he made that decision just before speaking to Turkish President Tayyip Erdogan by phone on Thursday. During which, he suggested to Erdogan that Turkish military officials continue the discussions while visiting their counterparts in Washington on Friday.

There were no firm commitments on troops for the safe zone from European allies as of Friday, and those talks continue.

“I’m very optimistic about it, but it’s not done yet,” the official said.

Turkey wants to set up a safe zone with logistical support from allies and says it should be cleared of the U.S.-backed Kurdish YPG militia, which Ankara considers a terrorist group.

Before the start of a meeting with his Turkish counterpart at the Pentagon, acting U.S. Defense Secretary Patrick Shanahan said the mission had not changed.

“The transition that we are working towards is stabilization and to enhance the security capability of local security forces,” Shanahan said.

Another U.S. official said Dunford had been working on the issue and speaking with allies for some time.

The official said the safe zone would not include Turkish troops or “Syrian opposition forces”. The U.S. troops would bring specific capabilities like intelligence and logistics.

Dunford said that he was confident that allies would step up in Syria.

UNITED STATES VS. TURKEY VS. RUSSIA VS. ASSAD REGIME

The United States and Turkey are at odds in Syria.

Turkey considers the Kurdish YPG a terrorist organization the U.S. is protecting. The U.S. considers the Muslim Brotherhood elements, hunkered down in Idlib, as embracing terrorism because the MB distills Sharia to its purest form. That form is at odds with Israel’s existence in the region.

Turkey wants to protect the MB elements as well as the Syrian population in Idlib with help from the U.S. to stop Vladimir Putin and Baschar al-Assad from gassing its citizens.

Most of the U.S.-Turkish negotiations center on finding common grounds in this paradox.