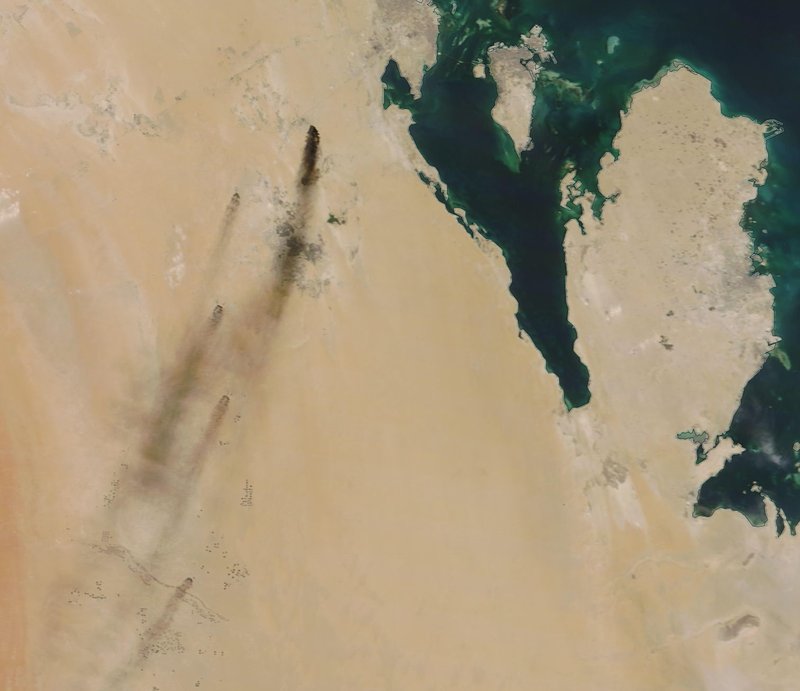 The President may not yet know it, but Iran strategy to defeat Donald Trump in 2020 was set in-motion yesterday.

Its Houthi proxy in Yemen successfully attacked the world’s largest oil processing facility in Saudi Arabia and a major oilfield operated by Saudi Aramco. The drone attack sparked a huge fire at a processor crucial to global energy supplies. Satellite imaging could clearly see the dark smoke rising in the desert.

It wasn’t clear if there were any injuries in the attacks in Buqyaq and the Khurais oil field, nor what effect it would have on oil production in the kingdom. The attack also likely will heighten tensions further across the wider Persian Gulf amid a confrontation between the U.S. and Iran over its unraveling nuclear deal with world powers. Tehran backs the Houthis amid a yearslong Saudi-led war against them in Yemen.

The fires began after the sites were “targeted by drones,” the Interior Ministry said in a statement. It said an investigation into the attack was underway.

In a short address aired by the Houthi’s Al-Masirah satellite news channel, military spokesman Yahia Sarie said the rebels launched 10 drones in their coordinated attack on the sites. He warned attacks by the rebels would only get worse if the war continues.

The only option for the Saudi government is to stop attacking us.

If Saudi Arabia stops attacking the Houthis, Iran would end up controlling the whole country of Yemen and all maritime traffic that passes through the Suez canal.

Saudi Aramco, the state-owned oil giant, did not immediately respond to questions from The Associated Press. The kingdom hopes soon to offer a sliver of the company in an initial public offering. No investor would risk an asset so vulnerable to war.

Higher oil prices at the pump in the U.S. do turn voters off. Even Teflon Don cannot escape pockets hurting while he is golfing.

Saudi Aramco describes its Abqaiq oil processing facility in Buqyaq as “the largest crude oil stabilization plant in the world.”

There was no immediate impact on global oil prices as markets were closed for the weekend across the world. Benchmark Brent crude had been trading at just above $60 a barrel. Monday is another story.

Higher oil prices at the pump in the U.S. do turn voters off. Even Teflon Don cannot escape pockets hurting while he is golfing.

The Saudi-led coalition has been battling the rebels since March 2015. The Iranian-backed Houthis hold Yemen’s capital, Sanaa, and other territory in the Arab world’s poorest country.

Since the start of the Saudi-led war, Houthi rebels have been using drones in combat. The first appeared to be off-the-shelf, hobby-kit-style drones. Later, versions nearly identical to Iranian models turned up. Iran denies supplying the Houthis with weapons, although the U.N., the West and Gulf Arab nations say Tehran does.

President Trump has remained aloof all along to the notion of neutralizing Iranian threats. With Iran upping the ante, Trump may not have any choice but to subject Iran to a military lesson to control the Mullahs’ terror.