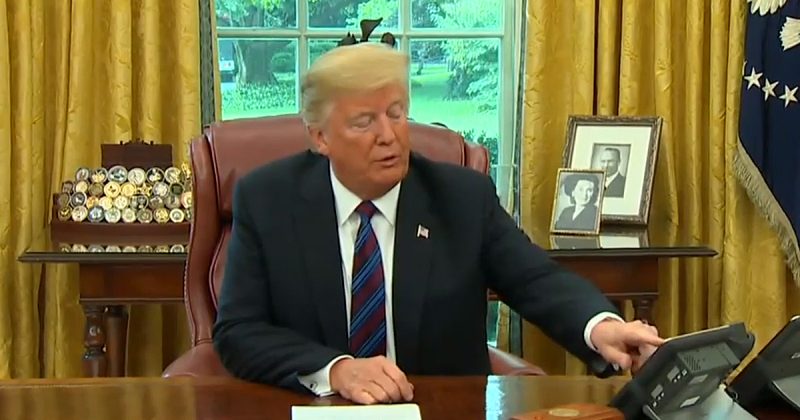 September 13, 2019 9:09 am 0
From Israel With Love: How Powerful a Magnet Assad Is to Terror
Why Israel Must Announce Its Syrian Strikes
Assad Shoots Russian Spy Plane, Putin Threatens Israel

It just so happens that Falafel was visiting the White House to interview the President. Just as they started, the President received a call from Benjamin Netanyahu. He placed the call on speaker not realizing Falafel was, after all, a reporter. Just so it happens, Falafel listens on Trump Netanyahu phone call.

Trump: And how Schlomcha you?

Bibi: Mr. President, Israel cannot permit the Mullahs to plant their dirty feet and paws in Syria. We are going to act. Can we rely on the U.S. for logistical support?

Trump: OK Bibi. But nothing more.

Bibi: This is our fight Mr. President.

Trump: My son-in-law tells me to lend all the support I can to Israel, but my Charlottesville supporters ain’t too happy. Distance from Israel gets me their votes. Can’t afford to offend them Bibi.

Bibi: Mr. President, I don’t mean to meddle in your affairs, but allow me to render an opinion on this matter. It does not serve the Jewish communities in America to empower this class of voters. Many harbor admiration for a past we all want to forget.

Trump: That’s my call. I talked to their leadership and they all assured me that the white supremacists in this country harbor no ill-will towards American Jews. Just like Putin told me he did not meddle in our elections.

WILL YOU PROTECT US IF ATTACKED?

Bibi: Mr. President, one last thing. I need your assurances the United States of America will protect Israel if attacked. In accordance with our traditional alliance.

Trump: You don’t have that guarantee. If Iran attacks Israel, you are on your own. I will not fight to save Israel or your ass. I love the Jews, though. My son-in-law is Jewish. Did you know that?

Bibi: But Mr. President, as your strongest ally in the region giving you the tools to stabilize it, every past U.S. President gave us that assurance.

Bibi: How about extending Israel credit to purchase the latest American weapons? Can I count on you in that area?

Trump: What’s in it for me?

Trump: I will extend you the credit, but what will you do for me?

Trump: Sold. What about its funding?

Bibi: We are a small country with a limited financial capacity Mr. President. We can’t afford such an expenditure.

Trump: I know. But your Mossad has all kind of dirt on those goat keepers royalty in Saudi Arabia and U.A.E. I want it all. Just an insurance policy if those Bedouin herders renege on their promises to me.

Trump then hangs-up. Turns to Falafel as if nothing happened

Trump: What brings you here Falafel?