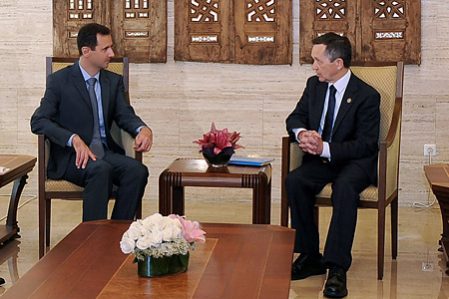 No other U.S. Official has been more supportive of the Assad regime, and indirectly promoted the Russian propaganda, than Dennis Kucinich. If one follows his rhetoric, his interviews, or his Tweets, you will find him standing shoulder-to-shoulder with a mass murderer enemy of America. The U.S. Government (i.e. Mueller) should investigate Dennis Kucinich fifth column status flying under the radar. Pro-Assad Russian interference in our democracy demands it.

Snopes.com, the oldest and largest fact-checking website, wrote a long article about his Assad connections entitled “Dennis Kucinich’s Visits to Syrian Dictator Bashar al-Assad Criticized Amid Ohio Governor’s Race“. Not a title we would have chosen giving his history and the recent Russian meddling in our affairs. Snopes.com is too kind.

The article details, among many damning information, recent payments made by two American pro-Assad brothers for towing the Assad line. Or, rather, for justifying his mass murder or worse, for creating doubt Assad is a killer. If it were not for the videos and images streaming from Syria, Dennis Kucinich would completely exonerate Assad from any terror.

On 4 April 2017, the same day dozens of civilians suffocated to death in a sarin gas attack carried out by the regime of Syrian president Bashar al-Assad in the town of Khan Sheikhoun, former United States Representative and current Ohio gubernatorial candidate Dennis Kucinich boarded a plane and flew to Britain to speak at a two-day conference attended by two Syrian government officials. The event was organized by the European Centre for the Study of Extremism (EuroCSE) — an organization described by multiple Syrian organizations in Britain as existing “primarily to spread propaganda for the Assad dictatorship.”

What motivates his support of Assad? Snopes.com gives us a hint.

On 17 April 2018, Kucinich was pressured by his political rivals to reveal that he was paid $20,000 to speak at the EuroCSE conference by an umbrella nonprofit on behalf of the Syria Solidarity Movement, a California-based organization that opposes U.S.-led regime change in Syria and shares regime propaganda and conspiratorial stories on its web site. These include unfounded claims that reputable human rights organizations like Amnesty International, Medecins Sans Frontiers (Doctors Without Borders) and Human Rights Watch, along with multiple Syrian organizations including the volunteer rescue group known popularly as the White Helmets, are “front” organizations for a nefarious conspiracy to bring down the Assad regime through so-called false flag attacks.

Whether his support is motivated by money or ideology, Dennis Kucinich is a menace to our democracy. By supporting Assad, he is supporting the Russian meddling. How can one split the hair between support for Assad without also spreading Russian propaganda?

Here is a Dennis Kucinich Tweet Snopes published to make that point.

More false intelligence? This sounds like a Russian troll to us. “False anything” is the Russian main propaganda line. The U.S. Government should investigate Dennis Kucinich fifth column status. We cannot have politicians in this country empowering our enemies at the expense of our democracy.

For once, let’s send the real pro-Russian culprits to jail.