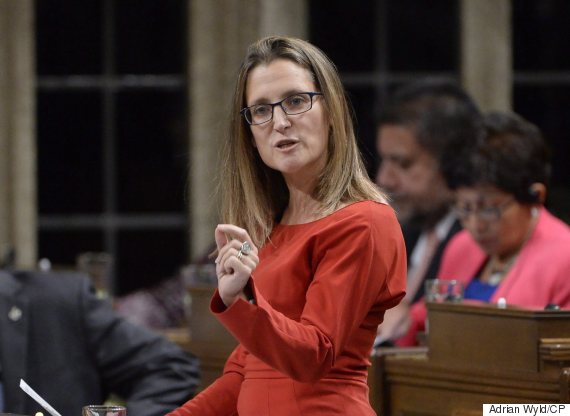 September 26, 2019 6:11 am 0
Who Will be the Next Syrian Dictator?
Barbarism Comes in Words Too, N’est Ce Pas Joshua Landis?
Israeli Police Arrest Several Pro-Assad Druze After Lynching

Freeland previously came out strongly against Waseem Ramli’s appointment to the position of Syrian honorary consul and promised timely action, but she had first wanted to hear Global Affairs Canada’s explanation for approving the position.

Upon review of the department’s decision, I have instructed officials to immediately revoke his status.

Canada joined several other countries in ejecting all Syrian diplomats after the 2012 Houla massacre; but Canada has maintained honorary consul positions in Montreal and Vancouver for reasons that remain mysterious. Usually, a third country takes over consular activities when diplomatic relations between two countries no longer exists.

According to activists, Ramli’s appointment to the position caused fear in the Syrian refugee community living in Canada. It also shocked Freeland, who said the bureaucrat who approved the appointment did not inform her or her staff.

We say, there must be a good reason. Look into their backgrounds Minister Freeland.

WHITE HELMETS ARE NOT TERRORISTS, YOU TERRORIST

Ramli posts frequently on Facebook in support of Assad. He told Canada’s Maclean’s magazine that the White Helmets, a group of volunteer first-responders in Syria, are a “terrorist organization”with links to al Qaeda. This is no different than saying the first responders on 9/11 were terrorists who helped al-Qaeda.

Freeland said in her statement:

No one who shares Mr. Ramli’s views should have ever been approved by Global Affairs Canada.

Her announcement is a “big relief” for the Syrian community. Bayan Khatib, a Syrian-Canadian in Toronto, told Reuters, the community is happy the Canadian government has responded with “appropriate action.”

She also expressed satisfaction that Freeland said she will initiate a review of how her staff process applicants like Ramli who support a terrorist regime.

As in the Red Notice that dictators slip through Interpol to punish their opponents under false pretenses, this appointment slipped the safety net that every country should have in place to avoid assisting the Assad regime.

According to the most recent government statistics, Canada accepted 58,650 Syrian refugees between 2015 and 2018 through both government and private citizen sponsorship,