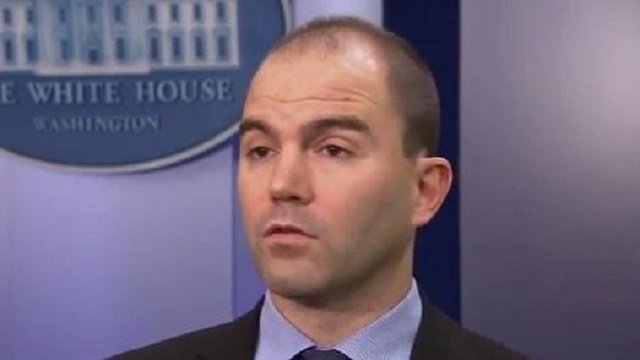 How did a novelist who knows so little about the Middle East come to decide America’s foreign policy in the region? By far the dumbest official in the Obama Administration has to be Ben Rhodes, the 37-year old deputy National Security Advisor with a Master’s degree in short story writing. Wait to hear Ben Rhodes dumbest idea yet.

Ben Rhodes was the genius behind the $500 million program to train Syrian rebels to fight ISIS, but not the Assad regime the root cause of all terror in Syria. To get a sense of the extent of the failure of Ben Rhodes program, listen to General Lloyd Austin in this 45 seconds video testify on the Hill.

Yes folks, Ben Rhodes spent $50 million of U.S. taxpayers money and he has 4 or 5 fighters to show for. $10 million a fighter must be a first in U.S. history.

Why such a preposterous and stunning failure? Because Ben Rhodes is clueless about Syria, its people, where they stand on issues, or what their goals are. It would not surprise us if he reads Wikipedia for all his knowledge on Syria. He is weaving the Syrian foreign policy based on the imagination of a novelist deciding what is good for his short story. He decided he could recruit Syrians to fight ISIS, but not the Assad regime. Surely, Ben Rhodes dumbest idea.

Today, we read about Ben Rhodes dumbest idea yet.

The National Security team at the White House is considering spending the remaining $450 millions of U.S. taxpayers money to train Syrian spies against ISIS and who would double as special trainees to pinpoint drone strike locations.

This is how the Wall Street Journal described the effort:

Under one proposal being crafted at the Pentagon, the $500 million train-and-equip program—a core component of the U.S. Syria strategy—would be supplanted by a more modest effort focused on creating specially trained militants empowered to call in U.S. airstrikes, defense officials said.

The Pentagon receives its order from the White House National Security team.

Does someone at this ignorant White House understand the support the Islamists have because they are the only ones defending the civilians from Assad barrel bombs? Does anyone understand that the Syrian people will denounce anyone who will join any effort sponsored by Obama? These spies or special trainees would be picked up within days of joining.

Does Ben Rhodes understand how much Barack Obama is hated in Syria for ignoring the plight of the civilians just to get his Iran Deal signed? No American effort, no matter how noble, and which does not strike the source of all evil in Syria represented by the Assad regime, will succeed in Syria. Ben Rhodes dumbest idea yet because he simply has no clue how much Assad is hated in Syria.

Why he has no clue? Because he listens to Iranian agents and propagandists in Washington deciding Obama’s Iran foreign policy. In our book, this makes Ben Rhodes dumbest White House staffer.

Obama’s foreign policy will always be a disaster because he chose to ignore U.S. allies in favor of thugs, mass murderers, and terrorists. So, grow-up Ben Rhodes by adapting to the realities on the ground.

Syria is not a novel you can imagine with paper and ink.