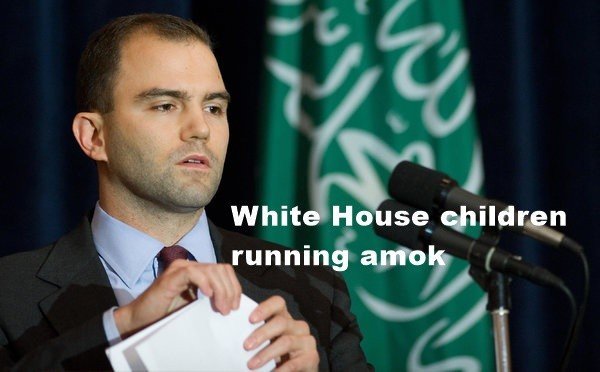 The article below, written by Matthew Continetti, appeared in the Washington Free Beacon under the title “The Coming Détente with Iran”

Since we feel Obama has already dragged the US into a poisonous détente with Iran that ultimately protected the murderous Assad regime and threatened our allies in the region, we felt it was more appropriate to call the article “White House children running amok”.

Deputy National Security Adviser and MFA in creative writing Ben Rhodes likened an Iranian nuclear deal to Obamacare in a talk to progressive activists last January, according to audio obtained by the Washington Free Beacon.

The remarks, made at a since-discontinued regular meeting of White House personnel and representatives of liberal interest groups, reveal the importance of a rapprochement with Iran to President Obama, who is looking to establish his legacy as his presidency enters its lame-duck phase.

“Bottom line is, this is the best opportunity we’ve had to resolve the Iranian issue diplomatically, certainly since President Obama came to office, and probably since the beginning of the Iraq war,” Rhodes said. “So no small opportunity, it’s a big deal. This is probably the biggest thing President Obama will do in his second term on foreign policy. This is healthcare for us, just to put it in context.”

Rhodes made the comparison as the White House was reeling from the botched rollout of the $2 billion Healthcare.gov. Polls continue to show that the health law, the Patient Protection and Affordable Care Act of 2010, remains unpopular.

“We’re already kind of thinking through, how do we structure a deal so we don’t necessarily require legislative action right away,” Rhodes said. “And there are ways to do that.”

That is similar to what an unnamed senior administration official told David Sanger of the New York Times last week for a piece headlined “Obama Sees an Iran Deal That Could Avoid Congress”: “We wouldn’t seek congressional legislation in any comprehensive agreement for years.”

White House spokesman Eric Schultz denied the Times story. But it is not as though the Obama White House has fallen out of love with executive action.

The interim deal with Iran struck in November 2013, in which the administration traded sanctions relief worth billions of dollars for promises to limit nuclear fuel production, was extended in July and is now scheduled to lapse on November 24.

And I am going to express fear. Fear that the chances of some sort of dangerous and misguided détente with Iran are high, and that they increase if Republicans capture the Senate and improve their majority in the House. Fear that the worse things get for Obama at home, the better the odds that he will hand the keys of the Middle East to Ayatollah Khamenei.

Fear that Obama sees an Iran deal not just as health care reform for the second term, but as his version of George W. Bush’s surge: a Hail Mary pass thrown in the fourth quarter in a long-shot attempt to salvage a legacy.

Bush ordered the surge despite having just lost an election. Obama is on the verge of losing another. And Obama will be no different from Bush in the pursuit of his desired ends.

Iran is Obama’s Iraq. It occupies the same place in the thinking of his administration that Iraq held in his predecessor’s. The desire for détente with Iran, for comity and diplomatic accord between longtime enemies, for a new Middle East in which security is left to regional stakeholders, and Shiite and Sunni alike see the United States as “evenhanded” in its treatment of Israelis and Palestinians, holds immense sway over the alliance of progressives and realists that conduct American foreign policy. It has for a decade.

“The support group should actively engage Iran and Syria in its diplomatic dialogue, without preconditions,” stated the report of the 2006 Iraq Study Group, authored in part by Ben Rhodes.

“To those who cling to power through corruption and deceit and the silencing of dissent,” President Obama said in his first Inaugural Address, “know that you are on the wrong side of history, but that we will extend a hand if you are willing to unclench your fist.”

He might as well have said it in Farsi.

Can’t you just see Obama and Jarrett, kicking back after a few glasses of Bordeaux at Restaurant Helen, rhapsodizing over the president’s unique perspective on the global south, quoting lines from Argo, visualizing the day he makes the first presidential visit to Tehran since Carter? For six years the White House has been careful not to provide the Iranians with any reason to reject negotiations, to prevent his fantasy from becoming real. To the contrary: It has been solicitous of Iran and Syria, in a demonstration of its willingness to address their grievances.

That is why Democrats called Bashar al-Assad a reformer, why Obama remained silent during the 2009 protests over Mahmoud Ahmadinejad’s rigged election, why the State Department doesn’t include human rights or ballistic missiles in the scope of its negotiations with Iran. It is why Obama has resisted overthrowing Assad even after he crossed the red line of chemical weapons use, why he refers to the “Islamic republic of Iran,” bestowing legitimacy on the revolutionary regime, and why administration officials reject congressional proposals to reinstate sanctions should the negotiations with Iran fail.

These decisions are not made in light of the national security interests of the United States. They are made to keep alive President Obama’s dream of peace with Iran. And the purpose of these decisions isn’t to mollify American politicians. It’s to satisfy Iranian ones.

“In the Iranian system, you essentially have three broad categories, to generalize,” Rhodes said last January. “You’ve got people who generally want to do a negotiation—I don’t know if they’re called moderates, but there are certainly people on their side who are serious about a deal.

“Then you’ve got hardliners who don’t want a deal at all and feel threatened by what’s going on. Then you’ve got people in the middle who are basically invested in this because the sanctions are hurting a lot and they feel compelled to do it. And they would do a deal in order to get one.”

According to Rhodes’ logic, any move by the Americans that strengthens the hardliners at the expense of the other two groups decreases the chances of a deal. Our foreign policy is left hamstrung, in a vain and counterproductive and quite likely futile attempt to put Obama in the history books as the man who reestablished ties between the United States and Iran.

A Republican Congress would not only find itself ignored by the White House. It would find itself powerless to stop détente. The Democratic Congress voted repeatedly for timelines for withdrawal from Iraq. Bush vetoed them. Obama would do the same.

But there is one x-factor: Supreme leader Ayatollah Khamenei, whose anti-Americanism is as deep as his Shiite radicalism. He has thwarted the ambitions of past American presidents who hoped to reconcile our two nations. There is no reason to assume he has had a change of heart. He is as aware as anyone of the president’s waning political fortunes.

Repudiated, isolated, ineffective, stymied, Obama cannot persuade the Iranians of the strength of the American position. So he will move as far as he can in the direction of the Iranian one. Unable to make Iran pro-American, he will settle for making America pro-Iranian. It is part of his dismal, pathetic, ill considered, shortsighted, and injurious “legacy.”

Bashar al-Assad is Syria’s problem, not its solution
Thoughts on Carrots and Sticks
The Gate-less Human Zoo
Slippery Barack Obama 976