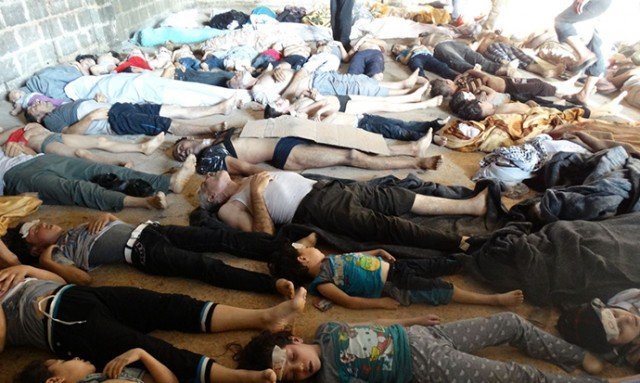 The Organization for the Prohibition of Chemical Weapons (OPCW) issued its finding based on its mission to Syria that indicate Assad has used Chlorine Gas in April against Syrian civilians. So much for Kerry’s agreement to strip Assad of Chemical Weapons.

The fact-finding mission (FFM) appointed by the OPCW Director-General to examine alleged uses of chlorine gas as a weapon in Syria has found information constituting “compelling confirmation” that a toxic chemical was used “systematically and repeatedly” as a weapon in villages in northern Syria earlier this year.

The report says chlorine was used in attacks on the villages of Talmanes, Al Tamanah and Kafr Zeta, all located in northern Syria. In May this year, the FFM had attempted to visit Kafr Zeta to gather on-site evidence in the aftermath of an alleged use there but was prevented from doing so when the convoy was attacked. The FFM then decided to carry out witness interviews in a safe location outside of Syria.

If you recall, Mr. Obama pirouetted on striking Assad for his use of Sarin gas in Ghouta, a suburbs of Damascus, in August 2013 that resulted in the death of 1,388 victims many of whom were women and children with many more permanently damaged.

Almost a year later, now that Assad finds himself safe from any US attacks, the  mass murderer repeats his deeds by using chemical weapons again to kill Syrian civilians.

Of course, both Obama and Kerry are silent on these latest attacks, so is the world community now accustomed to the atrocities of the Assad regime and dealing with them as a routine.

Then we wonder what makes ISIL tick and what makes it so successful in recruiting fighters from 74 different countries.

So much for Kerry’s agreement to strip Assad of Chemical Weapons.