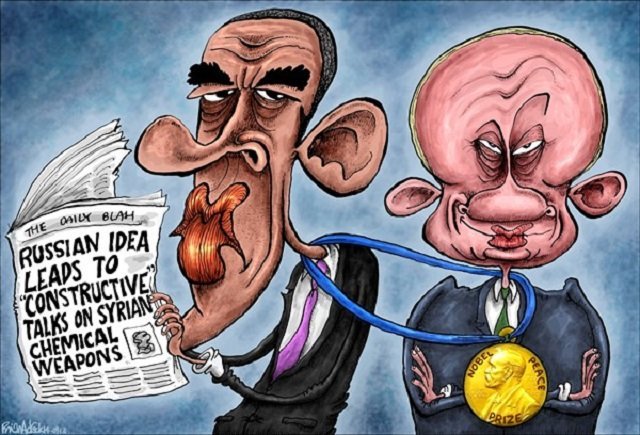 Assad for Nobel Prize in Chemistry

October 2, 2013 8:26 am 0
Sexual Abuse and Torture of Women in Assad’s Prisons
Is Assad preparing for dismissal of his crimes?
Russia Released List of Assad Agents Posing as Opposition

As the announcement for the Nobel Committee recipients of their coveted Nobel Prize approaches, it is important to keep what the Nobel Peace Prize delivers in perspective.

Have you noticed that some of the recipients of the Nobel Peace Prizes may or may not start wars but under their watch, violence, death, and terror escalate epidemically? Look at the terror so prevalent in MENA and East Africa under the watch of Obama to conclude the truthfulness in this statement.

It is almost as if the Nobel Prize for Peace helps sell more TNT, whose inventor is Alfred Nobel himself.

Some even think Putin should get a Nobel Peace Prize for stopping the Assad attack. No, not the chemical attack Assad perpetrated against children and women you silly, but the fake Obama attack on Syria. The fact the NY Times is taking the story seriously tells us America’s slowly dying matron newspaper wants Putin to get his prize.

Do you get the sense that powerful leaders play us like a Ping Pong? Obama got his prize, so now he mounts an attack on Syria that never materialized and Putin, in shining white armor, saves Assad. Curtain falls. Putin gets his prize with Obama’s help. It was not planned that way, but it sure looks that way if Putin get his prize.

Everyone forgot about the dissidents and the Russian journalists Putin killed or jailed. Everyone forgot about how he froze the Ukrainians to death in the middle of the winter by cutting delivery of Russian gas. Everyone forgot how he stood by Assad as the mass murderer killed Syrians by the tens of thousands, and everyone has forgotten that Putin is number one ally of Iran, a country that has called for the destruction of a US ally publicly and openly. How noble would the Nobel Peace Prize for Putin be under this scenario?

If the Nobel Peace Committee even considers Putin’s candidacy, you might as well award Assad the Nobel Prize for Chemistry. After all, his experiment was successful and Assad showed other would-be tyrants that his formula of attacking the innocent and getting away with it with the help of another recipient of a Nobel Prize for Peace works.

In fact, the Nobel Committee deciding the awardee of its prizes can score a trifecta here. Putin for Peace, Assad for Chemistry, and Snowden for Literature. Afterwards, the New York Times celebrates its Pulitzer for its coverage of all three prizes.

Nobel this or Nobel that, we say. If Putin gets a Nobel Prize, the whole experiment will eventually lead to diluting its value. It will be like buying a Big Mac and asking the news media to cover the event.

Assad for Nobel Prize in Chemistry

What Hafez May Have Told Baschar on His Death Bed
Assad May Be Controlling Food Delivered to Madaya
Will Assad survive the Iranian regime?
Opinions 894 Political Satire 115 Syrian Revolution 1349