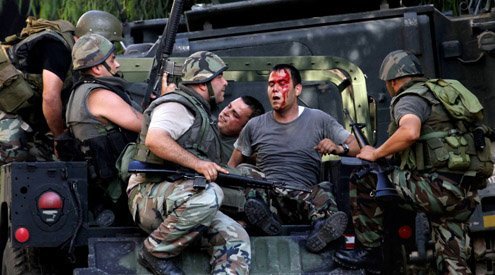 August 17, 2014 7:53 am 0
Politics is comedy
An Egyptian Scenario No One is Contemplating
Who Are the Beneficiaries of Islamic Terror?

Assad?s real threat to his rule is the Free Syrian Army whose majority of conscripts and officers began their military career in the Syrian army. The Free Syrian Army represents the moderates Obama is supposedly helping even though he never calls them by name in order to dilute their power. Instead, the Obama operatives have attributed a virtual label (i.e. moderates) to Syria?s struggle for freedom from Assad.

The Lebanese Daily Star reported this morning that the Lebanese authorities have arrested a Syrian man. Below is the news snippet:

The man, identified as Mohammad B., was arrested after authorities monitored contacts between him and a Syrian opposition group.

Security forces found an identification card issued by the FSA. He was referred to the judiciary for further investigation.

Grant you, Lebanon has to be careful its citizens are safe from any threats and even though Mohammad B. carries a Free Syrian Army card, he could be on a sinister mission.

Apparently, the man was not carrying any weapons. The Lebanese authorities would have disclosed this matter to take credit for its security aptitude.

Has Lebanon reached a point where it is serving Assad?s interests by arresting and neutralizing the moderates in Syria battling Assad? The Free Syrian Army is a pro-western group supported by the US and many of the Arab allies of the US.

It is a known fact that Hezbollah has infiltrated the Lebanese security apparatus and this arrest may be part of Hezbollah?s operations in Lebanon: If we cannot kill Syrians in Syria, arrest them in Lebanon and ship them back to Assad to torture them to death.

Where is the March 14 to voice its outrage over this arrest? Either charge the man with an infraction, as per Lebanese law, or release him.

Assad is killing the moderates faster than we can grow on trees.

Assad May Impose More Sanctions Against Syria
Muslim Populations in Europe: The Sharia Invasion
You Think Obama Did Not Know This Was Going to Happen?
Assad Genocide 429 Radicalism 567