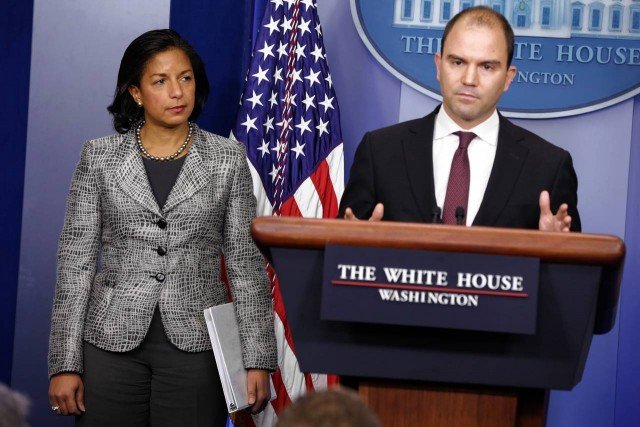 Everything Is Awesome, Mideast Edition

RPS Note: If you tell the likes of Ben Rhodes (far left ideologues) their foreign policies harm U.S. interests, they respond to your assertions by accusing you of war mongering. There is no middle ground with people like  Susan Rice or Ben Rhodes no matter the signs. Their policies are like a dead horse. Their stubbornness is even more dangerous because they truly believe they can make it rise from the dead.

It takes a special innocence to imagine that the chaos unfolding in the Middle East can be put right.

Ben Rhodes, President Obama’s deputy national security adviser, has been offering a reassuring view of the Iranian nuclear deal in the face of some Arab skepticism. “If you can diplomatically and peacefully resolve the nuclear issue in a way that prevents Iran from obtaining a nuclear weapon,” he told reporters last week, “we believe that will lead to a much more stable region.” Mr. Rhodes also contends that with a deal “there will be no need to see [a] regional arms race.”

So what’s more frightening: That Mr. Rhodes believes what he’s saying? Or that he does not?

Just for Mr. Rhodes’s benefit, here’s a refresher course on stability and the arms race in the Middle East since April 2, 2015, the day Mr. Obama announced his framework nuclear agreement with Iran.

April 12: A Swedish think tank reports that Saudi Arabia registered the biggest increase in defense spending in the world.

April 13: Moscow says it will deliver the S-300 air-defense system to Tehran. Supreme Leader Ali Khamenei later boasts that the U.S. “can’t do a damn thing” militarily against Iran.

April 17: Iran dispatches an armed convoy of ships, believed to be destined to resupply pro-Iranian Houthi rebels in Yemen in contravention of a U.N. arms embargo. The convoy turns back after the U.S. deploys an aircraft carrier to the region to shadow the ships.

April 20: Jason Rezaian, the American-born Washington Post reporter imprisoned in Iran since July, is charged with espionage, “collaborating with hostile governments” and “propaganda against the establishment.”

April 20: The British government informs the U.N. panel monitoring sanctions on Iran that it “is aware of an active Iranian nuclear procurement network” associated with two Iranian companies that are under international sanctions.

April 28: Iran seizes the 837-foot long Maersk Tigris, a Marshall Islands flagged cargo ship with 34 sailors aboard, as it transits the Strait of Hormuz along an internationally recognized route. The ship is released a week later after Maersk pays a fine of $163,000.

April 29: Former Saudi Intelligence Minister Turki al Faisal tells a conference in Seoul that the kingdom will match Iran’s nuclear capabilities with its own. “Whatever the Iranians have, we will have, too.” The prince also accuses Mr. Obama of going “behind the backs of the traditional allies to strike the deal.”

May 8: Reuters reports that inspectors have discovered traces of sarin gas at an undeclared military research site near Damascus. The report puts paid to administration boasts that its diplomacy effectively solved the Syrian chemical crisis.

May 11: Saudi Arabia’s King Salman withdraws from the Arab summit meeting with Mr. Obama. The king of Bahrain follows suit, preferring instead to attend a horse show with Britain’s Queen Elizabeth.

May 13: Reuters reports “the Czech Republic blocked an attempted purchase by Iran this year of a large shipment of sensitive technology usable for nuclear enrichment after false documentation raised suspicions.”

May 14: Iranian patrol boats fire upon a Singapore-flagged oil tanker with machine guns as it transits the Strait of Hormuz. The ship makes it safely to Dubai.

Also on May 17, Islamic State fighters in Iraq seize the city of Ramadi, the capital of Anbar Province. This is after Mr. Obama crowed in February that “our coalition is on the offensive, ISIL is on the defensive, and ISIL is going to lose.” Now the Iraqi government will turn to Shiite paramilitaries under Iranian control to try to retake the city, further turning the Baghdad government into an Iranian satrap.

I recount these events not just to illustrate the distance between Ben Rhodes’s concept of reality and reality itself. It’s also a question of speed. The Middle East, along with our position in it, is unraveling at an astonishing pace. Reckless drivers often don’t notice how fast they’re going until they’re about to crash.

We are near the point where there will be no walking back the mistakes we have made. No walking away from them, either. It takes a special innocence to imagine that nothing in life is irreversible, that everything can be put right, that fanaticism yields to reason and facts yield to wishes, and that the arc of Mideast history bends toward justice.

Ben Rhodes, and the administration he represents and typifies, is special.

Everything Is Awesome, Mideast Edition

An important NSC meeting on Syria
A disease called blame someone else
A stunning profile of Ben Rhodes, the asshole who is the president’s foreign policy guru
Slippery Barack Obama 965