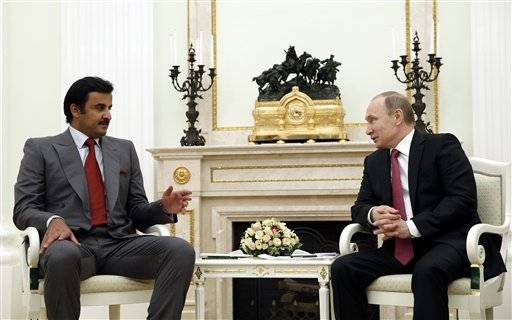 Once again, Falafel’s “deep friend” in the Kremlin came through when the Qatari ruler visited the Kremlin to meet Vladimir Putin. Falafel witnesses Qatari ruler Putin meeting. He reports on it below.

QR: Mr. Rasputin, how are you?

Putin: Did you call me Rasputin?

Putin: Did you bring your veiled wife with you?

Putin: Never mind. What can I do for you?

QR: I have a proposition that would return Istanbul to the Orthodox Church in return for the Muslim Brotherhood taking over Damascus, just like the Umayyads 1,400 years ago.

QR: Recep Erdogan is so corrupt, I can buy Istanbul from Turkey. I have much dineros, Qatari brides,  and Islamic leverage to offer.

QR: Yes. I will pay him handsomely in return for my buddies the Sharia’a ‘Allah wa Akbar’ Muslim Brotherhood Islamists replacing Assad. Of course, all the Orthodox Christians in Syria will have to move to Istanbul permanently.

Putin: Ok. On one condition. Assad will go once all Christian Orthodox move to Constantinople after selling the city. Not before.

QR: What guarantees do I have Assad will go?

QR: I did not expect that. Better than going to the bank. Thank you, oh thank you.

Putin: Don’t mention it. How much do you think Erdogan would want for the whole city?

QR: It’s a multi-part proposal. First, al-Jazeera would post his pictures in all of their offices. Globally. I believe he is a sucker for praise.

QR: Second, we would propose a new Qatari bride for his Islamic tendencies once every month for life.

QR: Third, we would build a 200-story-tower in Qatar and name it Erdogan Tower. It will be the tallest in the world.

QR: Fourth, we would totally finance a potent Turkish WMD program. He insisted on secrecy though. Please don’t tell him I said so. No clue why he wants a WMD program.

Putin: Where would you build the WMD factory?

Putin, without another word, gets up and leaves the room. Qatari ruler looks around and then smells his underarms for any odors.

Daft Qatari ruler believed he struck gold with his proposal.