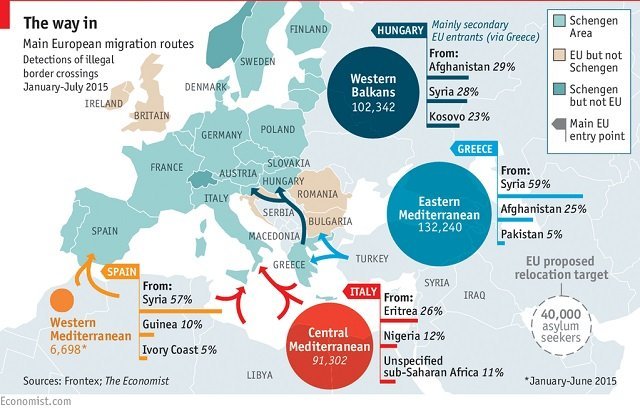 In the minutiae of foreign policy, often one can interpret circumstantial evidence to demonstrate deliberate secret agreements between two parties it was best never to make public. In the case of Syria, refugees no longer swarming the EU borders is that minutiae. The Europe secret agreement with the Assad Regime is as conclusive as the circumstances surrounding the obvious.

What the EU received, in their Europe secret agreement with the Assad regime, was the halting of all Syrian migration, which created domestic political tensions for the EU parties holding power against an ever restless constituent base. Europeans no longer wished to welcome Muslims in their midst and many reacted to their displeasure by voting for more right-wing political parties.

What Assad got in return is safety from ever forcefully leaving power. No official, in Europe or even in the U.S., speaks any longer of regime change in Syria even though ISIS has been defeated, which paved the way for replacing Assad. This is why the defeat of ISIS does not bother Assad. The organization his regime forged has accomplished its purpose.

By cleansing Syria of its Sunni Muslim population, and by forcing the same Sunnis to find ready-to-sail boats and ships to haul them to European shores, the Assad regime has killed two birds in one stone. Safety from regime change, and replacing anti-Assad Sunnis with pro-Assad Shia Muslim Iraqis and Iranian peasants.

There are some 5.6 million registered Syrian refugees the majority located in neighboring countries. Syrian refugees represents over 30% of the population of Syria. There are no official numbers available of how many Iranian and Iraqi peasants have made Syria their new home.

The highly probable secret agreement between the Assad regime and Europe leaves other important factors, such as the use of chemical weapons, or permitting Iran to literally use Syria as one gigantic military base, inconclusive. Iran aside, the use of chemical weapons gives Assad another bargaining chip there is almost a certainty that some appeaser diplomat, à la John Kerry, would negotiate to advance their careers.

That Assad would never honor such agreement, as he never honored the one John Kerry pursued, is besides the point. How many regal Americans, whose lives spin around silly entertainment, know this? Our bet is: Not enough to ask this question. People either don’t know or forgot what a sorry act of diplomacy John Kerry has been. A real Neville Chamberlain with all the glory of an ignorant pacifist in pursuit of a prize he deserves even less than Barack Obama.

Evil Hillary Clinton was no better. In the middle of massacring women and children, she called Assad a “reformer“.

There is a good reason why Syrian migrants scrambling to reach Europe is no longer problematic even though the onslaught on Syrian civilians in East Ghouta and the Idlib Province continues. Those two terror sieges by Assad and Putin reminds us all of the Aleppo siege.

Assad has honored his part by not facilitating Syrian migration, and Europe has honored Assad by accepting his terror against women and children.