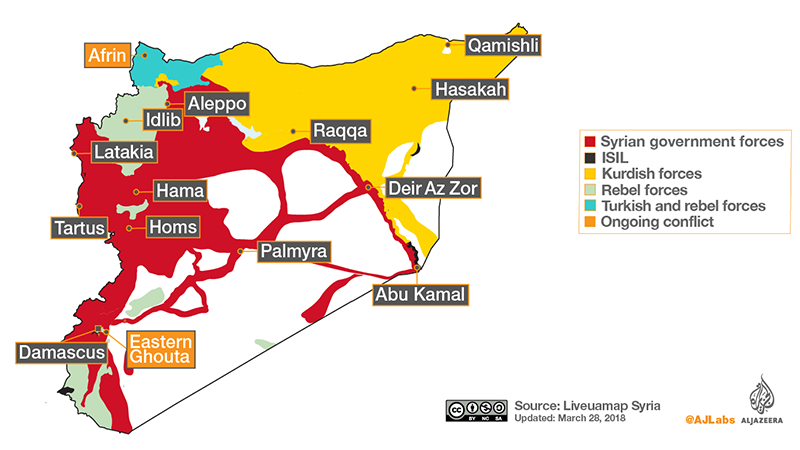 How did Syria fare under its previous dictator Hafez al-Assad in terms of land grab as opposed to his successor son Baschar? When the math is in, one can count the ways of Baschar bin Hafez losses of Syrian lands to his friends and enemies.

Syria lost the the Golan Heights to Israel in the 6-day war in June of 1967. At the time, none other than Hafez al-Assad served as Syria’s minister of defense. Four years later, on February 22, 1971, Hafez mounted a coup that resulted in taking over the country.

Where else in the world a leader loses important military battles and somehow finds his way to the top job? Did America elect George McClellan or Dwight Eisenhower to become her Commander-in-Chief? Only in Syria. Only the Assads.

However, Hafez al-Assad, less than five years later, recovers from the loss of the Golan Heights to Israel by finding his way to occupy Lebanon. Syrian troops entered the 10,452 square kilometer country in January of 1976 under the deceptive premise of helping the Christian Maronites, which ended badly for that community.

Hafez al-Assad killing machine reached deep in the Christian political establishment. His most prominent targets were two Christian Lebanese presidents Hafez al-Assad assassinated with cold blood. No Lebanese will ever forgive the Assads for assassinating Bachir Gemayel, the young energetic and charismatic, newly-voted president in Lebanon. Gemayel, like so many in the Maronite community, wanted the Syrians out of Lebanon.

Forward to February 14, 2005 when Baschar assassinated the prime minster of Lebanon Rafik Hariri. It was the beginning of the end of the Assad occupation. The United States forced Assad out in April of 2005. Just count the ways of Baschar bin Hafez losses.

The Hatay Province straddled Syria and Turkey, and both countries made claims to its lands. After a turbulent, but not violent history, Baschar bin Hafez, in early 2005, yielded quietly the province back to Turkey when his father, during his tenure, refused to let go.

Just another feather in Baschar bin Hafez cap. His father grabbed lands, and the son just lost them.

Today, Assad controls, at best, about 60% of Syria.

The Kurds in the north are few inches closer to declaring the birth of Kurdistan now that Iraq and Syria have acquiesced to Kurdish autonomy.

Lately, Turkey has demanded it enters Syria to patrol a safety belt separating its borders from Kurdish separatist aspirations. In reality, Turkey’s safe zone is occupation of Syrian lands under the auspices of fighting terror. Behind this land grab is US stamp of approval in return for Kurdish autonomy. Just count the ways of Baschar bin Hafez losses.

Although Assad invited Iran to help him win his war against his own people, Iran is changing forever the fabric of Syria. Not only it is more religious adhering to an extremist Muslim ideology called Wilayet al-Faqih, its social make-up is also changing as Iran offers free Syrian lands to Iraqis to ethnically cleanse the country from all Sunnis. Syria will never return to its past balanced state of tolerance.

Assad lost permanently the Golan Heights, Lebanon, the Hatay province, and northeast Syria to the separatist Kurds and Turkey. The Idlib province the anti-Assad camp occupies is within his grab, but the fat lady has yet to sing.

All in all, the Assad son simply lost the country and all the regional gains his father made during his 29 years’ tenure. If it was not for Russia and Iran, Assad would have lost the whole country. 100% of it.

If any of our readers considers Assad to be worthy of ruling Syria, we urge you to read one of the many biographies of President Dwight D. Eisenhower. In America, there is no room for losers.