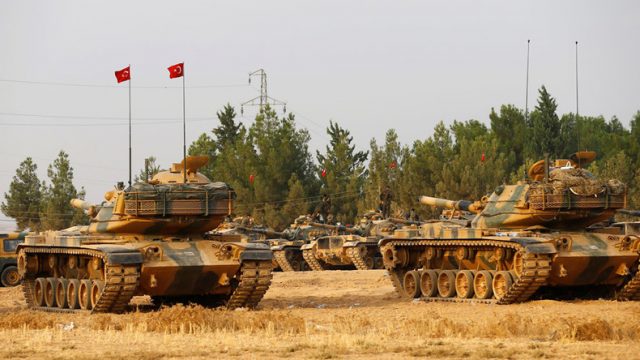 March 11, 2018 8:15 am 0
Count the Ways of Baschar bin Hafez Losses
Why Rami Makhlouf Remains Safe in Syria?
Fuel Shortages Cripple Damascus and Beyond

The titles could not be more deceptive. “The West might hardly believe it, but it now seems the Syrian war is ending – and Assad is the victor” bragged the not-so-brilliant Robert Fisk who is on Assad payroll. Vox headline lamented Bashar al-Assad is taking a sickening victory lap through Russia“. In reality, the last two days, we witnessed two battles two winners on opposite sides. The real Syrian war is just beginning with more regional militaries, rather than local rebels, now engaged in fighting.

In East Ghouta, on the outskirts of Damascus, the Assad army, backed by the Iranian violent Mullahs, were engaged in fierce battles early on Sunday on a critical front where government advances have in effect splintered the insurgent enclave into three. Assad seems to have won this battle unless the West can interfere to stop his army in its track. An unlikely scenario.

In Afrin, in Northwest Syria, Turkish forces have reached the outskirts of the town of Afrin after a weeks-long campaign against a Kurdish militia. Turkey and Syrian rebel groups it supports are advancing on the town from the east under intense bombardment. This region of Syria is very rich with oil. This is a guarded secret the Assads kept from the world to pilfer for the next generations of that cursed family.

The Assad army is backed by the regional terror of Iran, in addition to the international terror of Russia. The Turkish army, backing the religious Muslim Brotherhood zealots, is left alone by the United States to draw the northern map of Syria to its liking.

Eventually, those two regionals will confront each other towards their own March Madness. Two battles two winners on opposite sides. The Syrian war is getting bigger and more serious.

To declare Assad a winner, so early on, is tantamount to declaring India British. My guess, Assad will die before this war ends because in today’s Russian meddling environment, Syria is an opportunity for the West to clip Putin’s wings as punishment for thinking he is dealing with the clones of Barack Obama in Europe and America. Syria is an international platform and Putin is too deeply involved not to feel the pain of defeat and retreat.

The West will not let this opportunity to punish Putin dissipate.