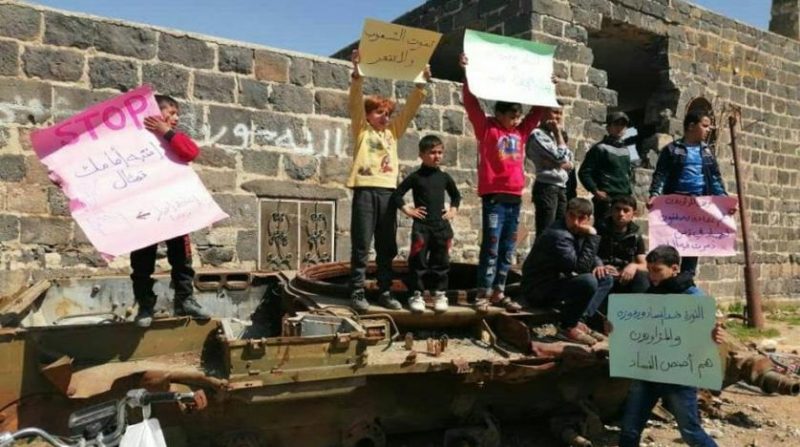 Hundreds of Syrians in the southern city of Deraa protested on Sunday at the erection of a new statue of the late Hafez al-Assad nearly eight years after the original was toppled at the outbreak of Syria’s civil war. The country is in ruins, yet the Assad regime is spending valuable funds on building statues. Assad priorities underline psychotic state of mind.

Demonstrators and witnesses said residents walked through the war-ravaged old quarter of the city calling for Assad’s overthrow, days before the eighth anniversary of the start of the conflict.

“Syria is ours, not for the house of Assad,” protesters chanted as security forces closed off the area to stop residents from other parts of the city joining the demonstration.

Deraa was where peaceful protests against 40 years of autocratic and brutal Assad family rule began in 2011, and were met by deadly force, before spreading across the country.

The Syrian army, aided by Russian air power and Iranian militias, retook control of Deraa from rebel forces in July on its way to regaining control of the bulk of Syrian territory.

But since then, residents of Deraa say disaffection has been growing as Assad’s secret police once more tighten their control and a campaign of arrests has sowed widespread fear.

The government had given schools and government employees a day off on Sunday to attend a pro-government rally to inaugurate the new bronze statue of late Hafez al-Assad, erected on the site of the previous statue felled by protesters.

That rally broke up after gunfire from near the square caused panic among attendees, a witness said.

A group of youths protesting in Deraa’s old quarter carried a placard reading: “It will fall. Your statue is from the past, it’s not welcome here.”’How Assad is spending valuable resources shows Assad priorities underline psychotic state of mind.

Lawyer and activist Adnan Masalma said: “People have gathered without organization and to peacefully demonstrate over just demands.”

After Deraa surrendered to government forces last summer, many residents chose to stay rather than head to remaining rebel-held areas in northern Syria, where tens of thousands of others displaced from recaptured areas have gathered.

“The country has been destroyed and, instead of reconstruction, we place memorials,” read another protest placard.

The Syrian authorities have reinstalled several large statues of the elder Assad after military victories that have seen his son regain most of the territory once held by rebels.

Many residents in Deraa province complain that services have not been fully restored and that there are chronic power shortages, while many young men fear a campaign of military conscription to fight the remaining rebels.

Some residents say Iranian-backed local militias now hold sway in strategically located southern Syria, bordering Jordan and Israel’s Golan Heights to the west, and that the militias act with impunity since the central government is too weak to impose its authority on the area.

The growing dissent in the province is blamed for a spate of attacks on army checkpoints, which the authorities blame on rebels operating covertly.