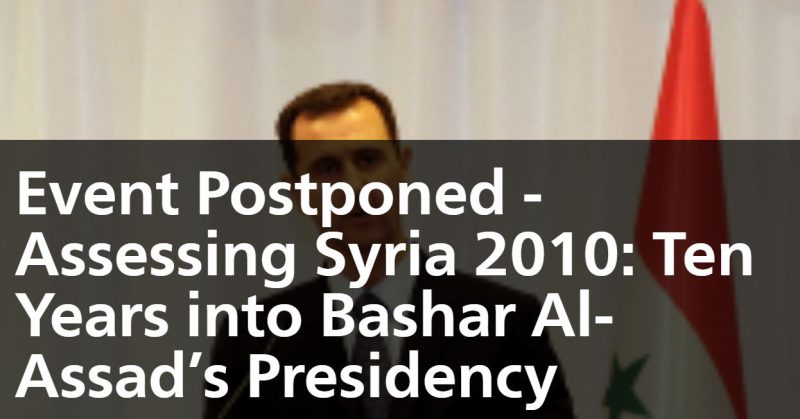 July 9, 2010 9:39 pm 1
Pope delivered message the world wanted to hear
If we do not defeat Assad, ISIL may defeat us
Assad is Injecting Fake Syrian Opposition in Geneva

An event sponsored by The Carnegie Middle East Center on Syria intended to assess Assad’s rule since he illegally inherited the office of the presidency 10 years ago, is inviting five different Syrian experts. ALL of whom are ardent regime supporters, and who will speak at the event held in Lebanon for one purpose only: Poke the Lebanese by administering, on their soil, a dose of the Assad reality of horrors. We call it Carnegie’s carnage.

The July 15 Carnegie’s carnage event is being facilitated by the Assad regime when up to 100,000 Syrians have been forbidden to travel because they have something critical to say about Assad’s rule. What very few people realize is that Syria has become the largest prison in the world.

For the Carnegie Endowment for International Peace, based in Washington DC, to provide a podium for a regime that willingly killed hundreds of US troops in Lebanon and Iraq is not really the issue — even though many will find it quite offensive as we do. The real issue is what will be discussed by these regime hacks on Lebanese soil? Why is Carnegie sponsoring an event intended to crush Lebanon’s democracy? The propaganda of the speakers will be hard to miss as they will certainly laud the man whose family occupied Lebanon physically for 29 years and never stopped occupying it morally, through Hezbollah and others, since Assad father came to power in 1970.

The visiting Syrian regime accessories have been mentioned many times in the western media. Some even are thoughtful enough to write about their boss in ways that reminds us of the most backward of countries. With that in mind, Carnegie, by inviting no Assad critic to the podium, has allowed itself to be a tool of propaganda against its own image of a thoughtful Think Tank. Should not that worry its Board of Trustees to appear as if they have become an arrow in Assad’s quiver of terror? Are we to respect the US laws clearly stating that Syria is a state sponsor of terrorism or are we to ignore them just for a donation? Had Carnegie invited one critic of the Assad regime, such observation would be misplaced.

We expect there will be no one to ask these questions in Carnegie’s carnage because they will be targeted by the Syrian regime. So, with Carnegie’s indulgence, we must ask them:

Finally, we will accept Carnegie’s premise of “Peace” and “Stability” through its promotion of ruthless and violent dictators if these Board of Trustees members Linda Mason, Jessica T. Mathews, Catherine James Paglia, Vanessa Ruiz, and Shirley M. Tilghman live for one year in Gaza incognito. If they wish for us life under extremism, should they not at least fully experience it first?

Carnegie should not be in the business of propagandizing evil dictators or harming the democratic process in Lebanon. Those who acquiesced to this invitation must rescind it if they do not want to carry the burden of bad press in Washington by their ill-conceived actions.

Baby recovered from rubble as Syrian tyrant Bashar Assad bombs his own people
Hey Israel, Iran Is Waiting for Russia to Save Assad
If Assad Remains in Power, the Salafis will Turn Syria into a Swamp
Opinions 890 Syrian Revolution 1348