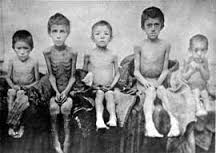 Coming upon our fifth year of a ruthless Syrian civil war, Friday February 20, the Assad forces entered the small village of Rityan near Aleppo and executed 10 Syrian children whose fathers or brothers were fighting against the Assad regime.

If Obama sits idly-by as Syrian Muslim children are being massacred by his protege Baschar al-Assad of Syria, why should the Israelis not be consumed by a parallel scenario where the Assad regime, the IRGC, Hezbollah, and the Mahdi Army massacre Jewish children as Obama watches idly-by while his partner Ayatollah Khamenei commits crimes against humanity? If Obama did not lift a finger for Muslim children, you better be sure he will not lift a finger when Jewish children risking massacres becomes a reality.

This is a provocative question Mr. Netanyahu should be asking during his speech to Congress on March 3 expressed this way: Syrian children are being massacred by the Assad regime with the full help of Iran while the White House fails to stop these massacres or at least interfere diplomatically to curb them.

What guarantees does Israel have the same won’t happen to their children by a nuclear Iran elevating terrorism to new heights? The only guarantee is to insure Iran does not and never acquires the capabilities of building a nuclear weapon.

If Obama is ignoring Muslim children, don’t you think he will ignore Jewish children at least twice as much?

Grant you, Israel is a strong nation that can defend herself. Nonetheless, if Iran and its satellites, with a population at least 15 times that of Israel, decides its twelfth Mahdi needs a push to be born then Israelis need to fear for their children getting massacred the way Assad is massacring Syria’s children. Not to take this into account is irresponsible.

Our President cannot even bring himself to admit that the Hyper Cacher attack in Paris was motivated by the Jewishness of the market. If Iran attacks Israel using southern Lebanon, southern Syria, and Hamas as launching pads for its evil, my guess Barack Obama would, more than likely, call it a war. Period. He will never call it that Shia extremists are attacking Israel because it is Jewish.

Jewish children risking massacres will be simply ignored by Barack Obama the way he is ignoring Syrian Muslim children being massacred by the Assad regime. I believe this to be true as long as Valerie Jarrett remains by Obama’s side.

In our opinion, she is the source of all the Iranian evil the Mullahs have inflicted upon the region.

To The Minorities of Syria: Meet Your Protector
Snapshot of a Syrian Life
The Oxymoronic Arab League
Slippery Barack Obama 976