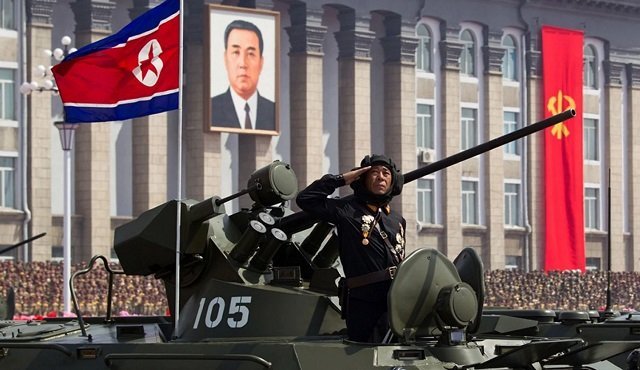 Are North Koreans fighting in Syria?

March 25, 2016 8:03 am 0
Pity the Russian People Led by Putin
Deficiencies of a Ba’athist State
Vladimir Putin sent Russian mercenaries to fight in Syria and Ukraine

Source: The Washington Post – by Adam Taylor (Are North Koreans fighting in Syria? It’s not as far-fetched as it sounds)

This week, representatives of Western-backed Syrian opposition delegation in Geneva told Russian state media that Bashar al-Assad had a surprising new ally on the Syrian battlefield: militia units from North Korea. “Two North Korean units are there, which are Chalma-1 and Chalma-7,” Asaad az-Zoubi, head of the High Negotiations Committee (HNC) to Syrian peace talks in the Swiss city, reportedly told Tass news agency on Tuesday.

In any other context, the presence of soldiers from the internationally isolated and geographically distant country North Korea might seem absurd. However, the civil war in Syria has emerged as a mini-world war over the past five years, with foreign fighters from at least 86 countries believed to be fighting there.

The Syrian regime headed by Assad is already known to have the support of a number of international partners, including Russia, Iran and the Lebanese militia group Hezbollah. And this isn’t the first time that there have been reports of soldiers from the Hermit Kingdom being involved in the conflict.

In 2013, Rami Abdulrahman, director of the London-based Syrian Observatory for Human Rights (SOHR), told Saudi-owned Arabic newspaper Al-Sharq al-Awsat that a small number of North Koreans were in Syria, to provide logistical and planning support. “The exact number of the officers is not known, but there are definitely 11 to 15 North Korean officers, most of whom speak Arabic,” Abdulrahman said, according to a translation publishedby South Korean outlet Chosun Ilbo. Abdulrahman’s report was followed up the next year by another from Jane’s Defence Weekly, which reported that North Korea was assisting helping Syria improve its missile capabilities.

These reports are hard to confirm, but many experts believe they are credible: North Korea and Syria have had a military relationship for decades and there’s little sign it’s been shaken recently.

“The North Koreans have been involved with Syria since the late-1960s,” says Joseph S. Bermudez Jr, a contributor to 38 North, an analysis website affiliated with the U.S.-Korea Institute at John Hopkins School of Advanced International Studies. That involvement included providing advisers and air defense troops immediately after the 1967 and 1973 wars with Israel, Bermudez says, and stretches to the modern era, when North Korea is believed to have provided technology used to help build the secret al-Kibar nuclear site in Syria, which was destroyed by an Israeli airstrike in 2007.

“Syria is one of North Korea’s longest standing and deepest political and military relationships,” Andrea Berger of the Royal United Services Institute adds. In a report published last year, Berger had described how the relationship was originally based upon military training but eventually graduated to weapons sales, including ballistic missiles and chemical weapons. Remarkably, the relationship between North Korea and Syria does appear to have survived to the present day, Berger noted, despite U.N. sanctions on North Korea which should, in theory, curtail them: It may even have thrived, with state media in both countries loudly publicizing the regular high-level meetings between Syria and North Korea.

Bermudez says that since the Arab Spring began, there have been a number of reports that small teams of North Korean soldiers were providing logistical support to the Syrian regime. However, he notes that some more recent seem to suggest North Korean soldiers are actively playing a role in fighting in Syria. “While I can’t confirm these reports,” Bermudez says, “it would not be out of character for North Korea to do so, as they historically have provided small ‘regime support’ forces to countries in crisis in Africa.”

Berger agrees. “Military to military cooperation between the two countries, including on-the-ground presence of North Korean troops, would be in keeping with the history of their bilateral relationship,” she says.

Not everyone is so sure. Philip Smyth, a researcher at the University of Maryland who studies groups allied to the Syrian regime, says that he has also recently seen a number of vague reports about North Koreans fighting for Assad in Syrian news sources that are sympathetic to the regime. However, he wasn’t sure of their accuracy. “Often, they would confuse Afghan Shia Hazara fighters for ‘Chinese’ or ‘Koreans,’ Smyth says, referring to an Afghan minority known to fight alongside the Syrian regime.

North Korean authorities have denied any military involvement in the past, with state news agency KCNA writing in 2013 that “foreign media” were “floating misinformation.”

But with North Korea increasingly cash-strapped, analysts have noted that it has increasingly sent citizens abroad to earn foreign money. These citizens often work in conditions that Marzuki Darusman, the special rapporteur on human rights in North Korea, has referred to as “forced labor.” For Pyongyang, perhaps the Syrian war is a payday.

Are North Koreans fighting in Syria? It’s not as far-fetched as it sounds