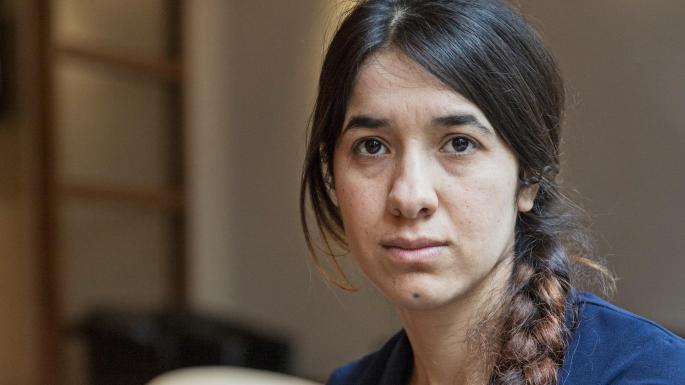 October 5, 2018 6:41 am 0
Syrian Defector Pleads With US Lawmakers to Stop Assad Terror
Germany is Set to Prosecute Assad Torturers
Assad Belongs in a Mental Institution

The statement below issued by the Nobel Committee for its Peace Prize speaks for itself. Bravo Nadia Murad for your courage surviving the terrorists in Iraq. You are an inspiration to every person who experienced rape in conflict zones.

Syrians are asking the Nobel Peace Prize Committee though, what about Assad sexual crimes against the women of Syria? A U.N. report issued in March 2018 cited the Assad regime raped thousands of women, men, and children. Don’t Syrian women deserve a Nobel Peace Prize and Assad the guillotine?

After the report, The Independent of London wrote:

Zahira (not her real name) was 45 when she was arrested at her workplace in a suburb of Damascus in 2013. As soon as she arrived at Al Mezzeh Military Airport, she was strip searched, tied to a bed and gang raped by five soldiers.

During one interrogation, in which she says she was sexually penetrated in “every body cavity”, a soldier filmed what was happening and threatened to show it to her family and community.

Between interrogations at Al Mezzeh she was held in solitary confinement, in a cell no bigger than one metre by one metre, with no natural light.

In Military Intelligence Branch 235, she slept in a three by four metre cell with up to 48 other women that was so cramped the prisoners had to sleep in shifts. They were allowed to use the toilet once every 12 hours, and to wash once in every 40 days.

The world community needs to recognize the courage of thousands of Syrian women subjected to Assad savagery. Their protection from evil doers in the Assad regime anomaly is our responsibility. Do you think Jimmy Carter, Dennis Kucinich, or Tulsi Gabbard know what Assad is capable of doing to women? We hope not. That would make their blind support a crime in and by itself.

The Nobel statement about Nadia Murad speaks for itself:

Nadia Murad is herself a victim of war crimes. She refused to accept the social codes that require women to remain silent and ashamed of the abuses to which they have been subjected. She has shown uncommon courage in recounting her own sufferings and speaking up on behalf of other victims.

Nadia Murad is a member of the Yazidi minority in northern Iraq, where she lived with her family in the remote village of Kocho. In August 2014 the Islamic State (IS) launched a brutal, systematic attack on the villages of the Sinjar district, aimed at exterminating the Yazidi population. In Nadia Murad’s village, several hundred people were massacred. The younger women, including underage children, were abducted and held as sex slaves. While a captive of the IS, Nadia Murad was repeatedly subjected to rape and other abuses. Her assaulters threatened to execute her if she did not convert to their hateful, inhuman version of Islam.

Nadia Murad is just one of an estimated 3 000 Yazidi girls and women who were victims of rape and other abuses by the IS army. The abuses were systematic, and part of a military strategy. Thus they served as a weapon in the fight against Yazidis and other religious minorities.

After a three-month nightmare Nadia Murad managed to flee. Following her escape, she chose to speak openly about what she had suffered. In 2016, at the age of just 23, she was named the UN’s first Goodwill Ambassador for the Dignity of Survivors of Human Trafficking.

Do Not Forget Syrian Women

Again, Bravo Nadia Murad. We wish you all the success with this recognition to carry on your important mission. And please, do not forget Syrian women who were raped by the Assad terrorist regime in Damascus or the ISIS terrorists Assad conveniently forged.