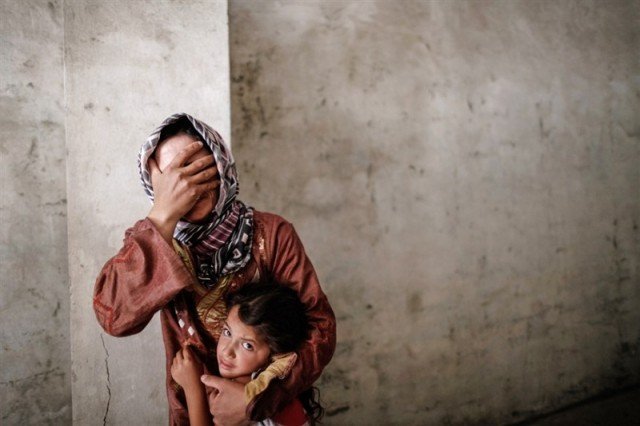 What a Syrian woman to do?

February 15, 2014 9:32 am 0
Assad May Be Controlling Food Delivered to Madaya
The tortures increase while Barack Obama refuses to strike Assad
So much for Kerry’s agreement to strip Assad of Chemical Weapons

There is a slight movement on Syria that, judging from the news streaming from Washington and Riyadh, may reverse the tide enough to force Assad out. Three distinct factors are playing a role in this shift.

First is Putin’s stubbornness in protecting the mass murderer Assad no matter the humanitarian tragedy playing before the world. Second is the failure of the peace talks in Geneva II, which are boasting Assad’s chances because they were supposed to transition Syria into a more representative government. Instead, they helped Assad assert himself by slaughtering more of his own people with impunity. And third is terrorism gaining momentum, especially amongst suicide Syrian women who left their loved ones dead on the battlefields and their children buried under the rubbles of barrel bombs.

During his visit to Beijing, Secretary Kerry let it be known that Mr. Obama is looking for a way out of the Syrian quagmire by seeking new “options” on Syria. Asked what they were, Mr. Kerry said:

“He has asked all of us to think about various options that may or may not exist… that evaluation, by necessity, given the circumstances, is taking place at this time. And when these options are ripe and when the president calls for it, there will undoubtedly be some discussion about them.”

I am a bit skeptical about how good these new options might be given they have been entrusted to the same people who have delivered us today’s Syria, thus leading the nation to more problems than solutions. There is this “No Bush options” mentality prevailing at the White House and everyone, down to the entry-level NSC staffers, race down the foreign policy maze by avoiding “Really, this is the way out” sign because President Bush was the one to scribble it after 8 years of extraordinary experience on the job.

However, judgment will be held until I see what these options are. The Obama Administration has almost four years of mistakes under its belt on Syria and the question “are they wiser as a result?” is begging for an answer.

Few thousand miles away, in Riyadh, Saudi Arabia, the shift on Syria is much more concrete. The Wall Street Journal reported:

“Washington’s Arab allies, disappointed with Syria peace talks, have agreed to provide rebels there with more sophisticated weaponry, including shoulder-fired missiles that can take down jets, according to Western and Arab diplomats and opposition figures. Saudi Arabia has offered to give the opposition for the first time Chinese man-portable air defense systems, or Manpads, and antitank guided missiles from Russia, according to an Arab diplomat and several opposition figures with knowledge of the efforts.”

Whether the Obama Administration has given the green light for such a decision after blocking every country in the world from assisting the Free Syrian Army remains a mystery. Asked about this, an Obama official said: “There hasn’t been a change internally on our view.”

If you were Iran holding a gun to Mr. Obama’s template, would you tighten or ease your grip? Exactly.

These weapons will, if Saudi Arabia holds its end of the bargain, reverse the tide slightly in favor of the rebels and award relief to all the besieged cities Assad has starved to death or has used as staging ground to attack civilians while the fanatic extreme elements run scot free.

In fact, Assad has never attacked but the liberal elements of the Free Syrian Army and the hapless civilians to revenge their uprising. For him, the more al-Qaeda prospers, the more the idiots in the West will fall for his ruse that his alternative are extremists.

In Lebanon, Hezbollah recently highlighted this new danger Syrian women pose to their infrastructure by canceling its 6th anniversary solemn parades and speeches commemorating the death of their security chief Imad Mughnyieh. According to some intelligence reports circulating, Hezbollah chief is so scared of suicide attacks against Hezbollah assets and people, all of Hezbollah now lives in a bunker.

Three Syrian women, volunteers of suicide missions, were captured trying to infiltrate Hezbollah regions. Apparently, they confessed that many more exist, which led to the cancellation.

What a desperate Syrian woman to do when her loved ones have perished before her eyes as a result of Hezbollah snipers and killers?

My sense this is a question that Prince Bandar bin Sultan asked. Not that more terror is encouraged, but a jolly hurrah for the Saudi Intelligence Chief for slowly and surely taking all of Hezbollah underground.