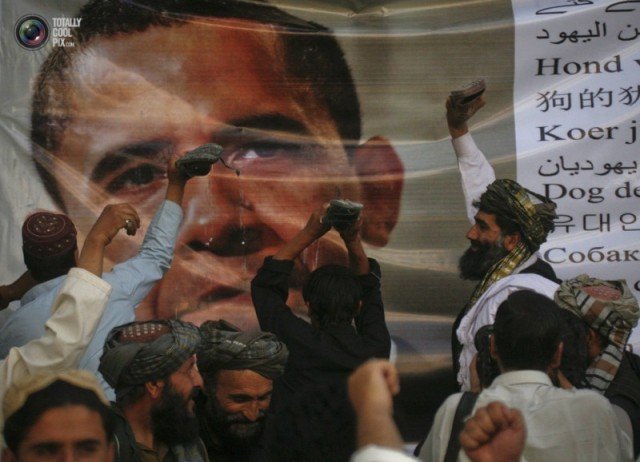 Could a booth with slippers to throw at President Obama’s picture and a racially-motivated Tweet by a Russian Olympian Putin honored in Sochi be enough to save Syria? Sitting within an echo’s distance from the White House, it may seem this way.

In an Op-Ed in the Washington Post entitled “Mr. Obama’s new tone on Syria”, the editorial staff describes this new settled and possible shift this way : “Mr. Obama described the Syrian conflict, which he dismissed five months ago as “someone else’s civil war,” as “one of our highest national security priorities.”. This new description was pronounced during a press conference with French President Hollande after a parade of national security experts testified in Congress about the threat of Islamic fanaticism taking root in the heart of Syria.

The threat of al-Qaeda in Syria has been around for quite some time, but through it all, Mr. Obama has all but ignored it for the better of over one year. However, on the heels of the video showing a booth in Iran erected during its celebratory 35th anniversary of kidnapping the country whose purpose was to throw slippers at pictures of Obama, someone is angry at the White House and rightly so. No matter how much we Americans disagree with our President, it is appalling to see the savages in Iran, represented by the rulers, demean and belittle the Office of the President of the United States. During this moment, all Americans do stand by our President.

Then we have Mr. Putin in Russia who selected Irina Rodnina, a legendary Russian Olympian athlete, to light the Olympic flame at the opening ceremony of Sochi. Rodnina tweeted a picture of Mr. & Mrs. Obama with a superimposed “fruit” on the picture (Too embarrassing to mention it), which could not be more offensive and more outrageous to the First Family. The fact Rodnina apologized later for her Tweet is too little, too late. Putin had her light the flame, which essentially means he agrees with her obscenity and racism.

The abuse Russia and Iran are heaving on our President is inexcusable. It demonstrates the true nature of our own enemy who will neither cease nor desist to weaken our resolve and continue to harm US interests. America needs to begin growling because the purrs so far have been received with utter contempt. It is time to dial back on Iran and confront the racist and barbaric Putin heads on where it hurts both countries the most: In Syria.

By dislodging Assad, Mr. Obama would kill two birds with one stone.