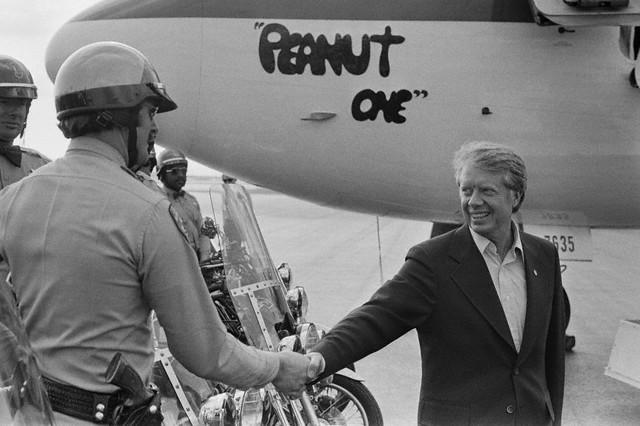 October 6, 2018 9:03 am 0
Israel wanted Assad gone since start of Syria civil war
Obama Says Assad Must Go to End Syria Civil War
Assad Chances Are Nil due to Dodgers, Defectors, and the Dying

Of all the people Falafel liked interviewing, his least favorite was always Jimmy Carter. This is why he did the former President a big favor by leaving him alone. However, after Jimmy Carter wrote his ugly Op-Ed calling for Assad to remain in power, Falafel felt an urgent need to understand our 39th President. So, Falafel visits Jimmy Carter at his peanut farm in Georgia.

As Falafel drove on the back roads of Georgia heading towards Jimmy Carter peanut farm, he could not help but remember that all the troubles in the Middle East today began when Carter facilitated Khomeini’s ascent to power. All the terror and the death the Iranian Ayatollahs have been exacting on their people and the Arabs have been the result of Jimmy Carter’s policy.

Carter met Falafel by the door. He welcomed him to a humble home one finds in any back road in America.

Falafel: Thank you Mr. President for your hospitality. The lemonade is just delicious.

Jimmy Carter: We usually have it for breakfast with some raw peanuts. Rosalynn makes a killer lemonade, doesn’t she?

Falafel: Funny you mentioned the word ‘killer’ because that’s my first question. Why do you support the killer Baschar al-Assad?

Jimmy Carter: I don’t support him. I want to see him changed, that’s all.

Jimmy Carter: I think every human is a good person. We just have to find his goodness. Sometimes, it is buried so deep, it is hard to extract it.

Falafel: Did you find Khomeini’s goodness?

Jimmy Carter: No, he died before I could do it. He died some 10 years after I gave the nod to permit his return to Iran to take over the country.

Jimmy Carter: Like I said, it could take a while.

Falafel: How long do you think it would take you to bring the goodness in Chemical Assad in the open?

Jimmy Carter: Give or take another 50 years.

Falafel: Until you succeed, Assad monstrosities keep piling up. While you doctor yourself and Chemical Assad, people are dropping like flies.

Jimmy Carter: You are exaggerating a bit Falafel. But, let us say he kills another half a million Syrian civilians. Isn’t that worth my effort to bring his goodness out?

Falafel: In other words, your end goal justifies the death and destruction of millions of Syrians if necessary?

Jimmy Carter: Look at my farm Falafel. Every year I plant new crop to replace the dead crop of the year before. We let one peanut go to harvest another the next season. We let thousands of Syrians go to harvest Chemical Assad goodness. It is a revolutionary evolution.

Falafel: What do you tell mothers whose sons perished from torture in Chemical Assad dungeons of death?

Jimmy Carter: I would invite them to show them how one peanut goes for another.

Falafel: So, humans are just peanuts to you?

Jimmy Carter: Not exactly, one can eat a peanut but one cannot eat a human. (Carter pausing) That’s funny. Let me write it down for people to quote me.

Falafel: What if you fail to bring Chemical Assad goodness out with your love?

Jimmy Carter: Glad you asked. I have a plan to accelerate the process. After all, I may not last another 50 years.

Jimmy Carter: If by 2050, I am unable to bring his goodness out, I have a plan to print a big banner to stretch from coast to coast. The banner would read “WE LOVE YOU BASCHAR”. I think Assad would not be able to resist that much American love. He would be so impressed, it would turn him into a cuddly teddy bear.

Falafel: What if that does not work Mr. President?

Jimmy Carter: Oh, I don’t know. Maybe it won’t work because I used the wrong font. Maybe my Carter Center should design a flowery Chemical Assad font made specially for him he won’t be able to resist!!! That would certainly work.

There you have it folks. The peanut farmer President has a terrific plan to bring Assad goodness out to stop gassing women and children.

Just be patient, please! And don’t forget to tell the bereaved Syrian mothers, past and future ones, that Jimmy Carter has a revolutionary plan that would make them dance with joy because it would stop Chemical Assad from killing and torturing Syrians.

To be ready when Chemical Assad is over 90 years old.