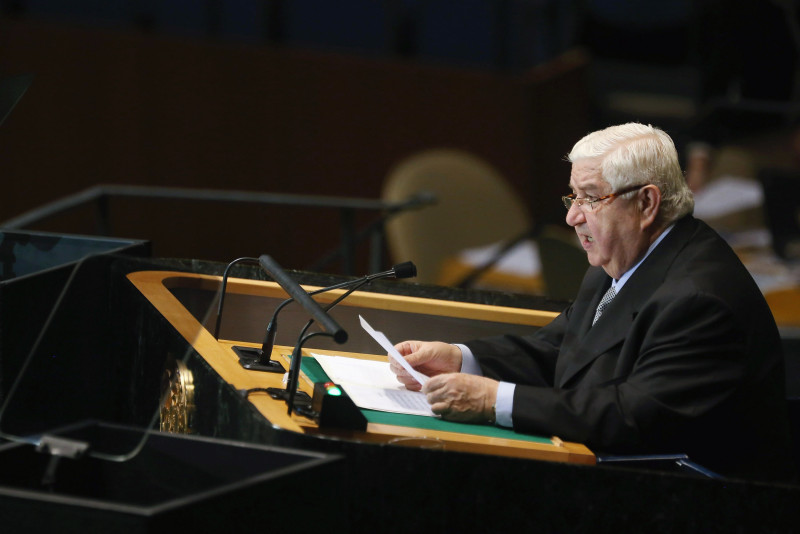 October 2, 2012 4:54 am 0
Washington, we have a problem in Syria
Support Consumer Sanctions Against Heinz Ketchup
Troubles in the Land of Freedom

Below is an open letter to Syrian foreign minister Walid al-Moallem TFS wrote on the occasion of the horrific and unbelievable speech he delivered at the United Nations. One that Foreign Policy magazine dubbed for its title as “We Sure Are Glad Russia Is Bombing Our Country“.

We have a very simple answer for Walid al-Moallem. All we have to tell him how great it is to live in the United States of America because of the freedoms we enjoy here. No better answer to give to a hack who stands by while his illegal government kills its own people.

First, we would like to extend our deep regrets to every civilized and democratic country around the world for watching the UN podium hosting you as the Syrian Foreign Minister and representative of the Assad regime engaged in killing its own people. We believe there must be a clear distinction made between governments who respect human rights and those who don’t. Equality to address others should be granted on the basis of a privilege and not a right.

When one leader after another addresses the world, from the same podium, by commenting on the atrocities being committed by your regime, it is almost comical to hear you accuse the United States of terrorism. Many who know our Syrian history well know that the Assad regime survives by terrorizing others. There is not one country in the world that has not been touched by the terror of the Assad family when Damascus became the capital hosting terrorists from all over the world. From Carlos to Ahmad Jibril, from al-Qaeda to Hezbollah. The prints of death of the regime you represent have excluded no one.

So forgive us if we find your appearance comedic when you accuse others of terror.

ASSAD TERROR ON THOUSANDS OF VIDEOS AND IMAGES

When thousands upon thousands of videos and images stream from Syria showing clearly who is the aggressor, and showing irrefutably the savagery by which your regime tortures and kills women and children, it makes you a liar to accuse others of terror. There is a point people reach when lying to them so egregiously becomes an insult to their intelligence. And you, sir, insulted millions of people with your speech at the UN.

Many Syrians escaped Syria with their parents or children to escape people like you and the masters you bow to. We escaped the suffocating political atmosphere, the lack of rights, dignity, and equality. We escaped illegal detentions and illegal trials. Further, we escaped from people like you to countries who respect the rights of others. In our case, we escaped to the United States of America.

Let me tell you about the country we escaped to.

SYRIA WILL BE LIKE THE UNITED STATES OF AMERICA

Accusing the United States of the very same terror your government has been perpetrating for over 40 years shows it’s time for the Assad regime to leave the stage. Syria could have been a great country and will one day become one, but not as long as your regime remains in power and not as long as Assad oppression blocks individual rights and freedoms without any accountability.

Finally, many Syrians hope to see you and others on trial soon for aiding and abetting a regime that terrorized and murdered its people en masse. They will be watching the trials while sitting in their own living rooms in the foreign countries they escaped to. Most will be planning for Syria to become a little America.

Our duty now is to fix the mistakes Syrians have inherited because of your rule, including the sectarian one you are leaving behind as a final gift to humanity.