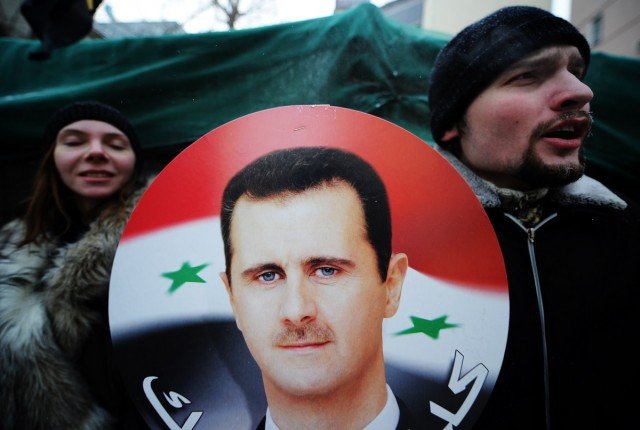 Washington, we have a problem in Syria

When it comes to Syria, Washington today sounds like a knock-knock joke. You know how it will end after you hear the first line.

As Damascus awakened this early morning to the sound of two loud explosions caused by an attack on the Ba’ath Party HQ building, Assad threatened the world by warning against “very dire” consequences for the oil-rich region if the west intervenes militarily.

In other words, “US elections are coming and if you do not want to see a $10 a gallon of gas, do not attack me“. Trailing behind his words are the Russian and the Iranian echoes.

This leaves the Syrian people the victims of a cold-war conflict. No hope in resolving this issue unless the US provides some kind of guarantees to Russia because I just do not see Obama taking the tough military path here.

Whatever the guarantees are, it will certainly include the Assad family, a potent proxy-family with close ties to the Soviet Union.. sorry, Russia. The Russians view Syria as an entry-point into the region as they watch Obama fold the tent in Iraq and Afghanistan.

Poll any American-Syrian on the street today and no matter the questions, if centered around the US Syrian policy, it is more than likely to get a picture of American-Syrians “hoping for hope”.

Some hope the Obama administration will see through the fog by trusting American values over the Erdogan’s values.

Some hope the Obama administration will extend a hand to the minorities, especially the Alawites, by not supporting or defending the Islamists in the SNC. Whoever designed this policy that rallied over 50% of the population (including very moderate Sunnis) around Assad should have his/her head examined.Â

If the Syrian opposition was more balanced, it would be far easier to strip Assad of his powers from within.

Maybe Georgetown U. should add a requisite course for its foreign relations graduates to be called “Kindergarten Politics”. It’s rather infantile to miss such an elementary concept.

And some, like myself, who see Syria heading in the wrong direction on so many fronts, hope becomes a distant candle.

Getting rid of Assad has proven to be more difficult than anyone expected so far because the policy has been timid, uncertain, and ill-focused.

[tweet “Even if he does not exit the stage, Assad has set in motion a series of events aimed at destroying the very fabric of Syria by soaking his weapons in religious blood.}

Years of oppression would have been quickly forgotten by Syrians eager to re-build had Assad stepped down to release the anger Syrians felt towards him personally; but he transformed the battleground to a bloodbath between the Sunni majority and the Alawite minority in the hope another 40 years of destruction follows long after he’s gone.

If that is not evil, then humanity is callously doomed.

Some of the Christian minorities, who started to sense the danger, are ingressing slowly towards self-preservation aided by other regional Christian communities. Some are too afraid and are failing to think through the lightening-fast unfolding events. But whatever happens, Syrians will shield them from all harm.

But before we entertain these noble thoughts, let’s hope for hope this administration sees the light first.

Washington, we have a problem in Syria

Loading...
Newer Post
Israel is the Litmus Test Between Muslims and Crude Muslims
Older Post
Syria: The Center of the Arab Spring or the Center of a Cold War?