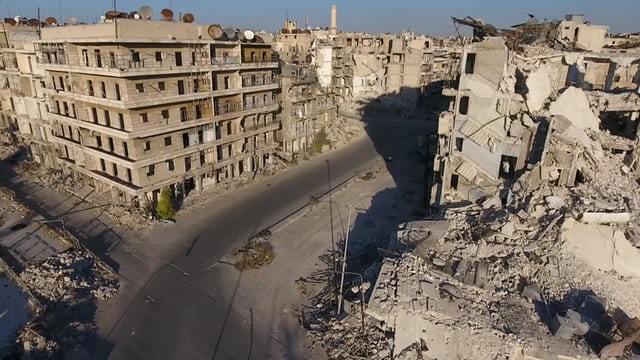 Yesterday marked a milestone in Syria. The Syrian Civil War enters 8th anniversary; we might as well claim it is coming up on 30th for all the signs indicate this regional war will continue until Assad and Iran leave the country. The longer Assad stays, the longer the suffering will be on both sides. Today, the only winner in this equation is Iran, which pounced on Assad weakness to control the country.

Eight years of war, violence, mass killings, and the use of more new weapons than any other field of battle. Russia’s Putin shined a light on its monstrosity in that regard. The Syrian people have become the symbol of a 21st century total apathy never witnessed before. If you think social media will save people from their butcher, think again. It will only save the ones the world is eager to save and Syrians do not fall in that category. To many countries around the world, the Syrian people are just laboratory rats. When was the last time you saw a protest sign that read “Hands-off our rats”.

Mind you, the opposition, partially, brought this upon itself. With a large Orthodox Christian population in Syria, the first ever large meeting of the Syrian opposition, totally controlled by the Muslim Brotherhood, took place in Istanbul. On purpose. That’s 1453 A.D. Constantinople. Imagine if the Nazis met in the halls of Congress to revive old Germany to imagine the impact this had on the 300-million strong Orthodox Church members around the world.

Then ISIS, with help from Assad and Putin, while Barack Obama played golf and called them “J.V.”, became a real threat when it founded an Islamic Caliphate. The kind that beheaded people publicly for the slightest blunder. ISIS slightly moved the humanity meter backward few inches. People started accepting that in order to kill ISIS, collateral damage is inevitable. Even if that collateral was mostly made up of gassed women and children. The outrage may have been sincere, but Assad dropping sarin gas on innocent civilians was not going to save Syrians.

In all that chaos, Iran sneaked in through the backdoor. It planted its ugly roots in Syria with the intention of colonizing the country with help from Assad. Just like a debutant Philippe Pétain of the Vichy Government helped Nazi Germany. Today, Assad is but a figurehead both Russia and Iran are trying hard to keep on the podium for his easy surrender disposition both countries need to stay in control. We wonder what would Hafez al-Assad say about what his shortsighted son has done to the country he built? Probably shoot him dead.

As Syrian Civil War enters 8th anniversary, it also enters a new phase where regional powers, rather than disconnected and leaderless rebel forces, duke it out in the open. In the next few years, there will be more attacks on Iranian positions in Syria, Assad positions, and the Turkish positions, which, inevitably, will contribute to more American and Russian attacks to control unfavorable outcomes. In the next few years, there will be no winners in Syria. Only the Syrian people suffering more atrocities, more deaths, involuntary displacement, and forced immigration.