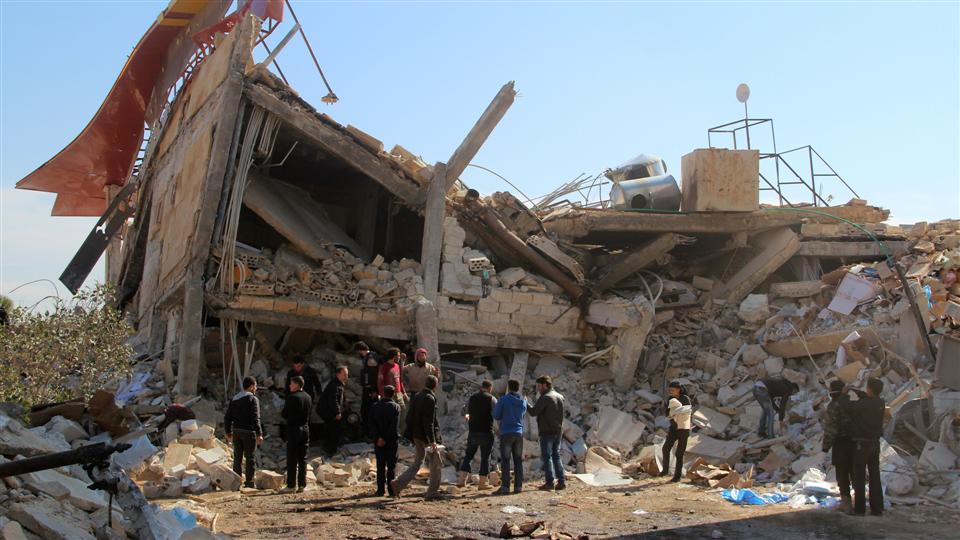 The anomaly of Assad existence in the 21st century as the imposed leader over people seeking freedom from his torture dungeons could not have been better exposed than from this interview that NPR published on its website discussing how Asma Assad is free of cancer, her husband is free to bomb hospitals.

Responding to Assad atrocities is a world full of words, but so very short on action. No one wants to save the lives of the unfortunate living under Assad’s hell. They either fear Assad for fostering another ISIS, or fear him for directing countless flotillas of Syrian refugees to Europe.

Below is the recording of the interview, as well as its transcript.

Find someone to cry on their shoulders after you read Asma Assad is free of cancer, her husband is free to bomb hospitals.

Sitting in a lush garden, sporting a chic blonde pixie cut and a pretty lace dress, Syrian President Bashar al-Assad’s wife, Asma, made this announcement in an interview broadcast on state TV this past week…

GARCIA-NAVARRO: She announced she is cancer-free after being diagnosed with breast cancer last year. She said her recovery was a testament to the quality of care in Syrian hospitals despite sanctions and the war, this while hospitals have been systematically targeted by the Syrian regime since 2011 when the civil war broke out. According to the United Nations, at least 25 hospitals and clinics have been destroyed or damaged by airstrikes just since the end of April this year.

Lama Fakih is the deputy director for the Middle East and North Africa Division of Human Rights Watch, and she joins us now from Beirut, Lebanon to explain why this interview has raised eyebrows.

GARCIA-NAVARRO: We should say first being cancer free is, of course, a good thing. But what was the reaction among Syrians and human rights activists when this interview aired?

FAKIH: Lulu, the interview and comments by Asma al-Assad created a frankly quite a lot of anger, you know? Unfortunately, Syrians have not been able to benefit from medical care in Syria since the beginning of the uprising in 2012. And that is because the Assad government has been systematically targeting medical facilities and medical personnel, pulling people out of ambulances and arresting them from hospitals, intentionally bombing hospitals. All of these are war crimes. And the result has been painfully clear and obvious that Syrians are being deprived of life-saving assistance in areas across the country.

GARCIA-NAVARRO: Middle Eastern leaders and their families, as you know, are usually known for concealing their ailments. What kind of image do you think the Assad government is trying to portray with this interview and being so public with Asma’s cancer diagnosis?

FAKIH: The Assad government has been very strategic in its PR campaigning, and I think this is a part of that. You know, when they talk about indiscriminate attacks on civilian populations, they talk about rooting out terrorists. They’re trying to show a different image to the rest of the world as part of their larger effort to come back into the good graces of the world of nations. And frankly, the world is not fooled. While the Assad government is calling for countries to come and reconstruct Syria, they are, at the same time, bombing hospitals in areas across Idlib.

ASMA ASSAD IS FREE OF CANCER, HER HUSBAND IS FREE TO BOMB HOSPITALS

GARCIA-NAVARRO: And what do we know about why the Syrian regime targets hospitals?

FAKIH: We see that the attacks on hospitals by the Syrian government are part and parcel of their operations to try to displace the civilian population. They go after civilian infrastructure – schools, hospitals, residential, compounds, areas that – they know if they bomb that they are going to push civilians out. And using these tactics, they have retaken territories across the country.

GARCIA-NAVARRO: Let’s talk about the situation on the ground. What have doctors in Syria in non-government-controlled areas told you about the conditions that they have to work in?

FAKIH: The conditions are nothing short of tragedy. We have seen that doctors are risking their lives to provide life-saving assistance without the basic medical supplies that they need to effectively do their jobs? Despite the fact that medical facilities are protected under international law, they have been repeatedly bombed and medical personnel killed and arrested by the Syrian government and by its ally Russia as part of its effort to stamp out any opposition or dissent in the country.

GARCIA-NAVARRO: So for Syrians who live in ravaged parts of the country, what do they do if they have cancer?

FAKIH: In the past eight years, we have documented so many cases of Syrians with chronic diseases who have not been able to get treatments that would save their lives. Children, elderly, adults, it really runs the gamut. It is nothing short of heartbreaking. People have fled to neighboring countries but even there they have struggled to find the resources to get the life-saving assistance that they need.

GARCIA-NAVARRO: That’s Lama Fakih, the deputy director for the Middle East and North Africa Division of Human Rights Watch. Thank you very much.