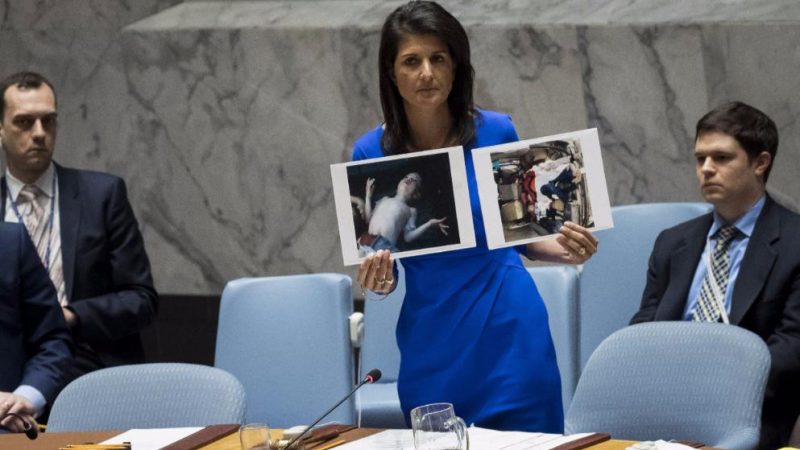 March 12, 2018 2:06 pm 0
Now That Rebels Are Winning
Putin and Assad Using Migrant Crisis as a Weapon
If the Alawites Want the Assads, They Could Have Them

U.S. Ambassador to the United Nations Nikki Haley warned on Monday that if the U.N. Security Council fails to act on Syria, Washington “remains prepared to act if we must,” just as it did last year when it bombed a Syrian government air base over a deadly chemical weapons attack. America enters warning stage against Assad, but no action is planned to save any civilians yet.

The warning stage is like window shopping. You are interested in buying but your credit card is securely stowed away.

It is not the path we prefer, but it is a path we have demonstrated we will take, and we are prepared to take again. When the international community consistently fails to act, there are times when states are compelled to take their own action.

Haley’s warning came as the United States asked the Security Council to demand an immediate 30-day ceasefire in Damascus and rebel-held eastern Ghouta, where the psychotic Baschar al-Assad’s forces, backed by Russia and Iran, have been shelling civilians.

The Security Council demanded a 30-day ceasefire across Syria in a unanimously adopted Feb. 24 resolution 2401.

U.N. Secretary-General Antonio Guterres briefed the council on Monday on the implementation of the resolution:

There has been no cessation of hostilities. Violence continues in eastern Ghouta and beyond – including in Afrin, parts of Idlib and into Damascus and its suburbs.

Despite some limited convoy deliveries, the provision of humanitarian aid and services has not been safe, unimpeded or sustained. No sieges have been lifted … To our knowledge, not one critically sick or wounded person has yet been evacuated.

Thousands of families are sleeping in the open in the streets of the biggest town of Syria’s rebel-held eastern Ghouta enclave, where there is no longer any room in packed cellars to shelter from government bombardment, local authorities said.

It took exactly 19 days from the passing of U.N. Resolution 2401 until a warning has been issued. Nineteen days in which countless number of civilians have died.

Excuse all Syrians if they take such warnings with a grain of salt.