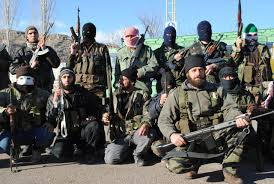 Syria Will Bury Khamenei Yet

When Hezbollah began fighting in Syria in the Spring of 2012, the call-to-arms issued by Hassan Nasrallah had one message: Save the Shia religious edifices from the Sunni onslaught. Since, it has become quite clear Hezbollah was not sent to Syria by Iran to save the tomb of Sayyeda Zainab from the rebels, but rather to insure Assad does not fall in his own tomb.

On the other side of the coin, rebels fighting the Assad regime were motivated by their call-to-arms as a result of the atrocities Assad kept committing against civilians. It is almost a certainty that without the barrel bombs and the chemical weapons, the rebels’ motivation would have been as tamed as the Hezbollah fighters dying for a foreigner.

Similarly, no matter the aphorism, no Iranian IRGC fighting a war in a foreign land is going to be as driven as a rebel avenging the death of his family because of Assad’s barrel bombs. The latest set-backs the regime has suffered on the battlefield are the beginning of the end of Assad. There is no way, no matter how well Russia equips the Assad regime, Assad is going to win the war when his army is slowly getting depleted and the replacing forces are mostly Iranian, Lebanese, and Afghani mercenaries.

This is how The Economist describes the situation on the ground:

So Syria’s fate may depend ever more on how well Mr Assad’s regime hangs together—and on Iran. His army and paramilitary forces often clash. Hizbullah men talk of Syrian soldiers firing on them. Syrian soldiers, in turn, are annoyed by Iranian and Hizbullah checkpoints set up to ensure that they stay in line. Syrian soldiers have long found understandings with rebels; sometimes they agree not to fight, while the rebels sometimes buy ammunition from the soldiers. Overall, Mr Assad’s position is being hollowed out.

Syria will bury Khamenei yet.

Syria has become the burial ground for Hezbollah and Iran. As long as those barrel bombs Assad continues dropping on civilians, and as long as foreigners fight his war, Assad is a dead man walking.

The sensible thing to do is for Putin to acquiesce to a transitional Assad-less Government manned by the non-criminal elements of the Assad regime and the truly-moderate opposition. Eventually, Saudi Arabia, Egypt, Russia, and the United States are going to participate in managing Syria whether one group likes it or not.

At this point, the longer Assad stays in power, the more difficult it is going to be to unite against extremism and terror on the rise in Syria and Iraq.

Syria Will Bury Khamenei Yet

Why Al-Qaeda is Not Seeking Assad’s Death?
Fanatics never forget, or forgive, they just fight
The bastards are stoning our women
Assad Genocide 429 Opinions 1017 Syrian Revolution 1335