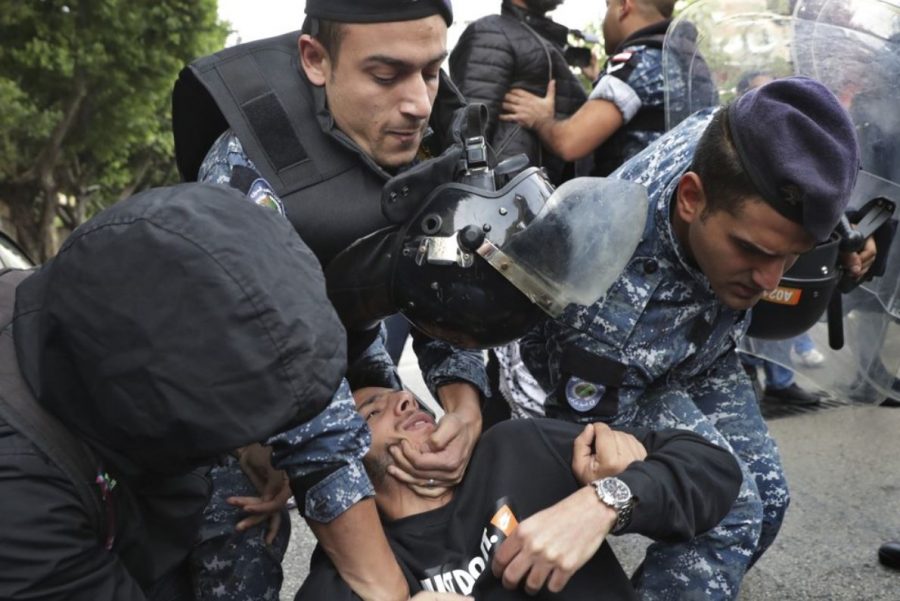 “This Is Lebanon, Not Iran” Protesters Are Chanting

November 26, 2019 1:32 am 0
Hey Lebanese People You Want Iran, You Got Iran
Terrorist Khamenei Losing His Grip Over Iraq
As Assad Destroyed Syria So Did Hezbollah Destroy Lebanon

Clashes between Lebanese Christian protesters and Hezbollah thugs are putting Lebanon’s military and security forces in a delicate position and threatening to crack open the country’s dangerous fault lines amid a political deadlock. For the first time, Lebanese protesters are shaking the delicate balance by chanting “This is Lebanon, not Iran”.

For weeks, the Lebanese security forces have taken pains to protect anti-government protesters. This is in stark contrast to Iraq. The security apparatus, beholden to Iran, have killed more than 340 people over the past month in a bloody response to similar protests.

The overnight violence gave a preview into a worst-case scenario for Lebanon’s crisis. The country’s U.S.-trained military increasingly finds itself in the middle between pro- and anti-Hezbollah factions.

By attacking protesters Sunday night, Hezbollah sent an Iranian message that it is willing to use force to protect its political power. Confronting the powerful Iranian-backed Hezbollah, however, is out of the question for the military as doing so would wreck the neutral position it seeks to maintain and could split its ranks.

The army is in a difficult position facing multiple challenges and moving cautiously between the lines.

She said the military has sought to protect the protesters and freedom of expression. It is increasingly grappling with how to deal with road closures and violence.

The U.N. Security Council urged all actors in Lebanon on Monday to engage in “intensive national dialogue and to maintain the peaceful character of the protests” by respecting the right to peaceful assembly and protest.

Calling this “a very critical time for Lebanon,” the U.N.’s most powerful body also commended Lebanon’s armed forces and state security institutions for their role in protecting the right to peaceful assembly and protest.

“THIS IS LEBANON, NOT IRAN”

“Shiite, Shiite, Shiite!” Hezbollah supporters waving the group’s yellow flag shouted, taunting the protesters, many of them Christians. The protesters chanted back, “This is Lebanon, not Iran,” and “Terrorist, terrorist, Hezbollah is a terrorist” — the first time they have used such a chant.

The violence began when supporters of Hezbollah and the other main Shiite faction, Amal, attacked protesters who had blocked a main Beirut thoroughfare known as the Ring Road. The blockade aims at exerting pressure on politicians to form a new government after Prime Minister Saad Hariri offered his resignation Oct. 29.

Carrying clubs and metal rods, the Hezbollah thugs arrived on scooters, chanting pro-Hezbollah slogans. They beat up several protesters. Both sides chanted insults, then threw stones at each other for hours.

Security forces stood between them but did little to stop the fighting. Finally, after several hours, they fired tear gas at both sides to disperse them. The road was eventually opened before daybreak Monday.

By that time, protesters’ tents were destroyed in areas close to the Ring Road. Eyewitnesses saw damaged windshields of cars parked near Riad Solh Square and shop windows smashed.

The nationwide protests have so far been overwhelmingly peaceful since they started Oct. 17.

Nabih Berri, over the years, amassed a fortune worth hundreds of millions by raiding and pilfering the Lebanese Treasury.

Politicians have failed to agree on a new Cabinet since Hariri’s government resigned Oct. 29. Hezbollah and Amal insist Hariri form a new government made up of technocrats and politicians; but Hariri — echoing protester demands — says it must be made up only of experts who would focus on Lebanon’s economic crisis.

As the deadlock drags on, tempers are rising.

The situation is moving toward a dangerous phase because after 40 days of protests, people are beginning to get tired and frustrated and might resort to actions that are out of control.

The army is one of the few state institutions that enjoy wide support and respect among the public. It is seen by many as a unifying force in the deeply divided country. It has for the most part worked to defuse tensions and protect protesters, though on two occasions it allowed Hezbollah and Amal supporters to wreck tents at the main protest site in downtown Beirut.

Many Lebanese consider the head of Amal, Nabih Berri, to be the most corrupt man in the country. He has, over the years, amassed a fortune worth hundreds of millions by raiding and pilfering the Lebanese Treasury.

Hisham Jaber, a retired Lebanese general who heads the Middle East Center for Studies and Political Research, said the army is in a “delicate” position and could not have done more than it did Sunday night.

The military is already at the center of a debate in U.S. policy-making circles. The Trump administration is now withholding more than $100 million in U.S. military assistance to Lebanon that has been approved by Congress, without providing an explanation for the hold.

That has raised concerns among some in the U.S. security community who see the aid — largely used to buy U.S.-made military equipment — as key to countering Iran’s influence in Lebanon. Others, however, including pro-Israel lawmakers in Congress, have sought to defund the military, arguing Hezbollah has compromised it. The U.S. designates Hezbollah as a terrorist organization.

U.S. administrations have long believed that a strong Lebanese army could be a counter to Hezbollah’s weapons. It could deprive the militants of the excuse to keep their arms.

IF NOT THE ARMY, THEN THE CHRISTIAN MILITIAS

The 70,000-strong force split along sectarian lines during Lebanon’s 1975-90 civil war. Since then, it has largely succeeded in achieving a level of stability by maintaining a tough balancing act. One that included coordinating with Hezbollah on security matters.

Jaber said it is impossible for the security forces to clash with Hezbollah because “this will lead to divisions within the army.”

“This Is Lebanon, Not Iran” Protesters Are Chanting