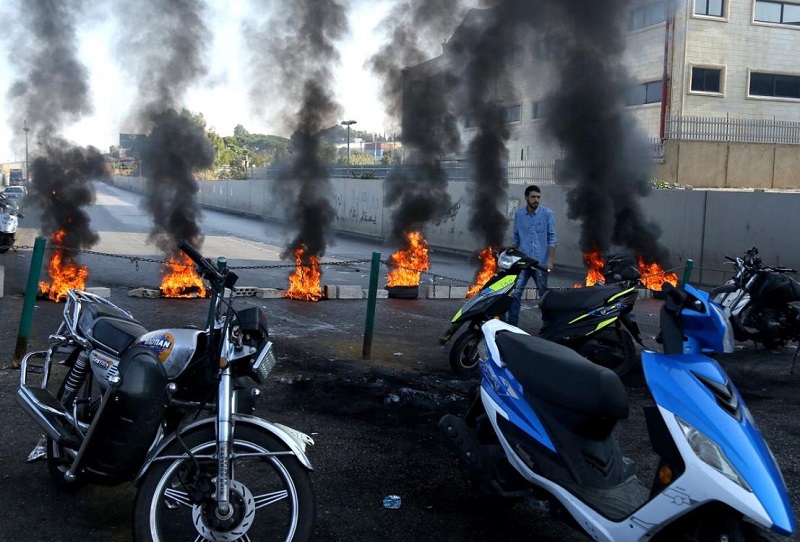 Protesters barricaded main roads across Lebanon on Wednesday after President Michel Aoun enraged demonstrators by urging them to end their revolt against corruption and cronyism in the political establishment. Aoun makes no decisions if the Iranian proxy Hezbollah does not provide its green light. Terrorist Hezbollah is persistent on destroying Lebanon no matter the economic or political consequences.

AOUN IS DUMBER THAN DUMB

His remarks in a television interview late on Tuesday ignited demonstrations overnight in which a protester was shot and killed after an altercation with Lebanese soldiers at a roadblock south of Beirut.

The killing marked a bloody twist to the crisis that has gripped Lebanon for nearly a month. It further heightened the tensions in a country trapped in a deep political and economic crisis.

The man was a follower of Walid Jumblatt, a veteran Druze politician and former civil war militia leader, who has urged his supporters to remain calm.

Protesters said Aoun’s comments, including a warning that the revolt risked “catastrophe”, showed leaders were out of touch.

Marwan al-Amine, one of dozens of protesters gathering near the presidential palace, said:

It is as if they are detached from reality, as if the people have no opinion, no voice.

In a remark widely understood to mean that Aoun (i.e. Hezbollah) was telling protesters to emigrate if they didn’t like how the country was run, the president said that if decent people could not be found to lead the protest movement they should leave the country.

A 33-year-old protester, Linda Boulos Mikari, blocking a road in Beirut’s Nahr al-Kalb area, said Aoun had talked to the protesters as if they were children. “Respect us a little,” she said. “Respect this people sleeping in the streets for a month.”

Schools and banks were closed for a second straight day. They have been shut for much of the four weeks since the start of the protests against political leaders seen as venal and unable to rescue Lebanon from rising poverty and unemployment.

One banker said his banks is freezing all transfers for now.

The reaction (to Aoun) was very spontaneous. People felt we have to ramp up the pressure … We will not stop.

Petrakian is Armenian. She belongs to the Orthodox Church Hezbollah stood by in its war against the majority Sunni people of Syria. Her voice demonstrates the collapse of sectarian support Hezbollah needs to maintain its grip on power in Lebanon.

In his interview, Aoun indicated there was no breakthrough in talks over forming a new government to replace Saad al-Hariri’s coalition cabinet. Hariri, who quit on Oct. 29, was hesitant about being prime minister again, he said.

Aoun also said a purely technocratic government, as demanded by many protesters, would not be able to govern Lebanon and so it should include politicians.

DOLLARS “UNDER THE PILLOW”

Addressing protesters in his interview, he said, “If you continue in this way, you will strike Lebanon and your interests … If they keep going, there is a catastrophe.”

Caretaker Prime Minister Saad al-Hariri called the head of the army and the police and stressed the need to protect citizens and ensure the safety of the protesters.

Aoun said on Twitter economic conditions were deteriorating further due to country’s current circumstances. The start of oil and gas exploration – expected soon — would only worsen matters as politicians would likely raid the revenues. Just as they do in Iraq while the people languish in total poverty. Terrorist Hezbollah is persistent on destroying Lebanon.

Commercial banks, seeking to avoid capital flight, have been imposing tight restrictions on financial transfers out of Lebanon and U.S. dollar withdrawals. The authorities have not however announced official capital controls.

Banks shut their doors on Tuesday and Wednesday. Bank employees went on strike concerned about security risks posed by depositors demanding their money and protesters.

Aoun called on Lebanese not to rush to the banks, saying their money was safe. He also said Lebanese were keeping dollars “under the pillow”, referring to money kept at home.

Hariri, who is aligned with Western and Gulf Arab states, wants to be prime minister of a technocratic cabinet. He believes such government would secure urgently needed international financial support.

But the heavily armed group Hezbollah and its ally Amal believe Hariri aims mainly to keep Hezbollah out of government. Hezbollah killed his father Rafik al-Hariri in 2005.

Iran-backed Hezbollah is classified as a terrorist group by the United States. Tehran sets the political tone in Iraq, Syria, and Lebanon. All three countries, in one form or another, are rising against Tehran’s domination.

Protesters blocked the main road in Khalde, the scene of Tuesday’s shooting. They burned tires as if candles of mourning.

He is Lebanon’s martyr … his blood is the responsibility of everyone occupying a post from the president on down. Today, here, it is civil disobedience.

A a 50-year-old protester, Atef, in the southern city of Sidon, said:

We won’t back down at all, especially since we are facing authorities who don’t see and don’t hear.