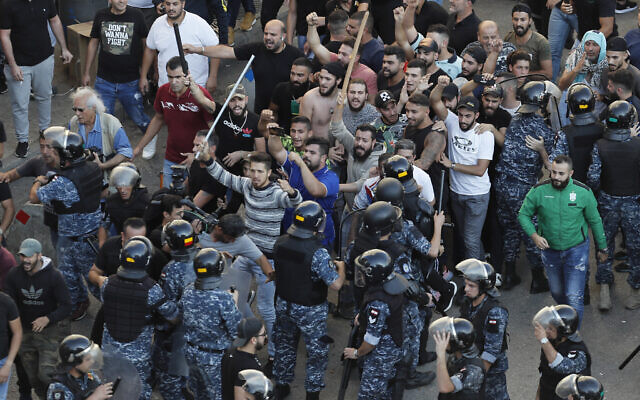 November 25, 2019 12:30 am 0
The Threat France Poses for Iran in Lebanon
Hezbollah Corruption Knows No Bounds
How Hezbollah is Deliberately Harming Lebanon

The confrontations began after dozens of thugs of the Iran-backed militant group arrived on scooters and attacked the peaceful protesters with clubs and metal rods; while chanting pro-Hezbollah slogans. Riot police and soldiers then formed a human barrier, separating the two sides.

Groups of young men threw stones at each other for hours, with security forces in the middle. Hezbollah thugs beat and injured several people. A few Hezbollah thugs taunted the protesters by waving their Muslim Shiite group’s large yellow flag.

The confrontations were some of the worst since protests erupted in Lebanon on Oct. 17, with demonstrators demanding an end to widespread corruption and mismanagement by the political class that has governed for three decades.

The protests forced the government of Prime Minister Saad Hariri to resign on Oct. 29, and politicians have failed to agree on a new Cabinet since, despite a rapidly deteriorating economic crisis.

The leaderless protesters say they are blocking roads to exert pressure on politicians to form a new government.

Protesters on the other side responded: “Hezbollah is terrorist”. In reference to Hezbollah snipers targeting starved pregnant Syrian mothers foraging for food out in the open.

The attacks occurred after protesters blocked a major intersection known as the Ring Road that links eastern neighborhoods of the capital with western parts. Protesters simultaneously closed roads in areas north of Beirut and in the eastern Bekaa Valley.

Hezbollah thugs have attacked the main protest camp in central Beirut on at least two occasions. They destroyed tents set up by protesters.

The leader of the Iran-backed Hezbollah, Hassan Nasrallah, has said the nationwide protests have been exploited by foreign powers. He has warned they could drag Lebanon toward civil war.

New taxes triggered the unprecedented nationwide protests. They came on the heels of an austerity budget that cut public spending, pensions and employee benefits to tackle a deepening economic crisis.

They have since evolved into calls for the entire political class, of which Hezbollah controls, to leave.