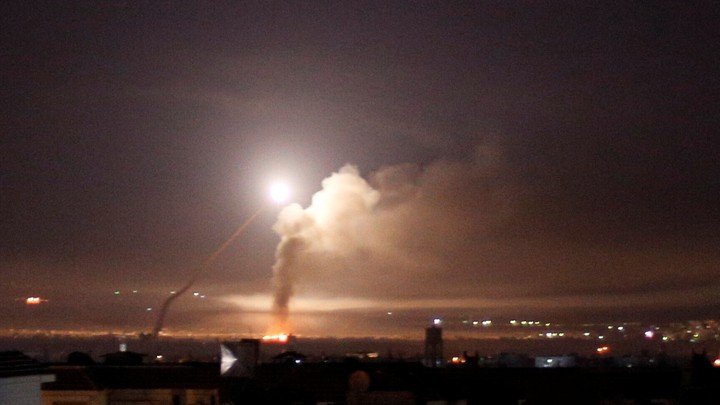 May 19, 2019 6:46 am 0
Iraqi Cleric Sistani Wants Iranian Wings Clipped
The UN Dropped a Second Bomb on Lebanon
The Lebanese Are In Disbelief Over The UN Hariri Verdict

For the second night in a row, Israel attacked Iranian and Hezbollah bases in Syria. Residents said loud blasts echoed across Damascus late on Friday coming directly from neighboring Israel.

Syrian opposition close to the Muslim Brotherhood monitoring events in Syria said that Al Kisweh area, which is home to Iranian and Hezbollah bases south-west of Damascus, was the target of the attack. Residents in the area heard three large explosions.

Israel’s military declined to comment on the report. Israel has been more open in recent months about targeting Iran and Hezbollah in Syria, both of which have forces aiding the butcher of Damascus.

Israel deems Iran its biggest enemy and the heavily armed Shi’ite Hezbollah movement as the main threat on its borders. The United States has recently tightened the economic noose around the Ayatollahs in Tehran. President Trump levied heavy-handed sanctions, which aim at halting 100% of all Iranian oil exports.

IRAN RETALIATES FOR US SANCTIONS

Many analysts believe Iran retaliated by sabotaging four Saudi and Emirati oil tankers in the Gulf hoping to drive oil prices up without giving cause for a U.S. attack on Iran.

Iran also engineered through its proxy in Yemen a drone attack on Saudi Aramco pipelines, which drove Brent crude prices up 1.12% according to Australian cape Breton Post.

Meanwhile, Israeli officials, alarmed by Tehran’s expanding clout next door, have acknowledged carrying out scores of strikes during the eight-year conflict in Syria where Iran and Hezbollah have played a key role in helping Assad’s army defeat rebels and militants.

The attacks took place at the tail end of Eurovision music contest Israel is hosting for 2019.

?? The winner of the Eurovision Song Contest 2019 is Duncan Laurence, representing The Netherlands with his song, Arcade!