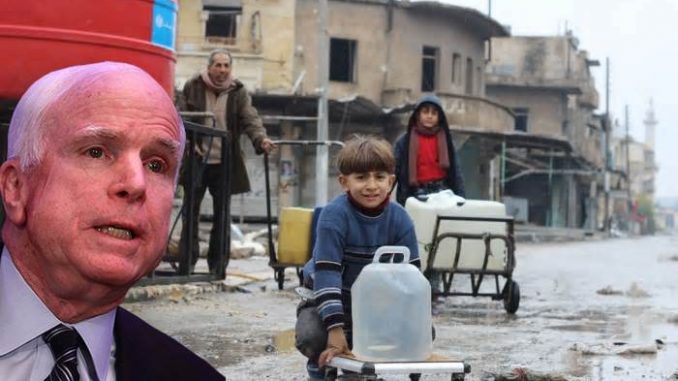 Republican Senator McCain met with rebels in Syria. John McCain is a former presidential candidate and an outspoken advocate for U.S. military aid to the Syrian opposition. It was a surprise visit to the war-torn country on Monday, his spokesman said.

Spokesman Brian Rogers confirmed McCain’s meeting with the rebels, but declined to give any details about the visit, which may fuel pressure on Washington to intervene in a conflict that is believed to have claimed 80,000 lives.

The visit came as U.S. Secretary of State John Kerry and Russian Foreign Minister Sergei Lavrov pledged to do their utmost to bring Syria’s warring parties together, and new allegations surfaced about chemical weapons use in the civil war.

General Salem Idris, who leads the Supreme Military Council of the Free Syrian Army, told the Daily Beast in an interview that McCain’s visit came at a critical time for the rebels, who have stepped up their calls for U.S. support, including heavy weapons, creation of a no-fly zone and air strikes.

“The visit of Senator McCain to Syria is very important and very useful especially at this time,” the publication quoted Idris as saying. “We need American help to have change on the ground; we are now in a very critical situation.”

McCain is the highest-ranking U.S. official to visit Syria since Robert Ford, the U.S. ambassador to Syria, crossed the border into northern Syria to meet with Syrian opposition leaders earlier this month.

It was not immediately clear if McCain, a fierce critic of the Obama administration’s handling of the Syrian crisis, told government leaders about his plans to visit the country.

A senior State Department official, in Paris with Kerry, confirmed that McCain did “cross into Syrian territory” but referred all questions to McCain’s office.

Senator McCain met the rebels after entering Syria from the country’s border with Turkey. He stayed there for several hours before returning to Turkey, according to the Daily Beast report. It said Senator McCain met with assembled leaders of Free Syrian Army units in both Turkey and Syria.

McCain, who made a similar visit to Libya early in that conflict, called for U.S. military aid to the forces opposing Syria’s butcher of Damascus Baschar al-Assad in a Time magazine column earlier this month, arguing that the cost of inaction outweighed the cost of intervention.

“The U.S. does not have to act alone, put boots on the ground or destroy every Syrian air-defense system to make a difference,”

McCain wrote, arguing that training for the rebels, targeted air strikes and the stationing of Patriot missiles just across the border would help change the current dynamic.

McCain recalled his support for a U.S.-led effort under then President Bill Clinton to stop mass atrocities in Bosnia two decades ago and said the United States was uniquely positioned to help in Syria as well.

“Taking these steps would save innocent lives, give the moderate opposition a better chance to succeed and eventually provide security and responsible governance in Syria after Assad,”

McCain wrote in the Time magazine article. “However, the longer we wait, the worse the situation gets.”

The Obama administration has stopped short of providing lethal assistance to Syrian opposition forces. The president has resisted pressure to save Syria from Iranian terror.

A U.S. Senate panel voted overwhelmingly last week to send weapons to forces fighting the Syrian government, but the Pentagon remains concerned, with no basis, about Assad’s ability to shoot down enemy aircraft with surface-to-air missiles, particularly in a sustained campaign.

The Israelis penetrate Syrian air space all the times and not one of their fighter jets has suffered the Pentagon’s lame excuse.