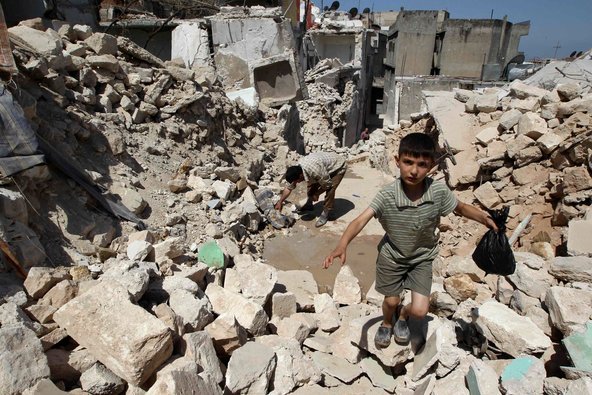 Does Spain’s History Provide a Lesson in Syria’s Civil War?

May 29, 2013 9:52 am 0
Is the Arab League Trading Syria for its Security?
What Some Arabs Tell Their Children
Obama’s Hate for Israel II

LONDON – In the debate over the rights and wrongs of foreign intervention in Syria, some have sought parallels in an earlier internal struggle that divided nations: the Spanish Civil War.

The conflict that pitted Spaniard against Spaniard from 1936 to 1939  saw an international regime of non-intervention flouted by Nazi Germany and Fascist Italy, and later the Soviet Union, as the democratic powers stood aside.

Foreign volunteers fought on both sides in an ideological struggle between defenders of Spain’s democratic government, supported by the revolutionary left, and General Francisco Franco’s autocratic traditionalists, backed by Hitler and Mussolini.

Seeking to apply the lessons of Spain to the Syrian conflict, Michael Petrou at Maclean’s magazine wrote on May 9, “We said it was a Spanish conflict, a civil war, and should be decided by the Spaniards. It wasn’t. The democracies might not have intervened, but other powers did.”

Barry Rubin, an American expert on the Middle East, drew similar parallels a year ago when he wrote: “In several respects, the Syrian civil war is the Spanish Civil War of our time.”

Commenting that the Syrian rebels were “a mixed bag who also include evil forces,” Mr. Rubin said that moderate elements deserved outside support.

“The Iranian regime is helping one side with huge amounts of money and arms, as Nazi Germany did for the Franco forces,” he wrote. “The Turkish regime and the Saudis are helping the other side a bit, but giving disproportionate assistance to the Muslim Brotherhood, like the U.S.S.R. gave to the Communists in Spain.”

The late-1930s was a time when Europe’s democratic powers showed both a readiness to appease Hitler’s Germany and an ambivalence toward the Communist-backed forces fighting Franco.

The result was a policy of non-intervention motivated, according to Norman J. Padelford, a contemporary American academic, “by the desire to prevent Europe becoming so bound up with and so divided over the ideological aspects of the conflict that the fighting would lead to a general European war.”

Critics of non-intervention argued then and since that the hands-off policy of the democratic powers starved the Spanish Republic of the means to fight a war that saw the direct involvement of Germany and Italy, which used it as a dress rehearsal for World War II.

The policy also allowed Moscow to dominate what began as a struggle in defense of democracy. By the end of the war, Soviet-backed elements on the Republican side were expending as much effort on suppressing their anti-fascist allies as they were on confronting Franco’s fascists.

Fouad Ajami, a Lebanese-born academic who supported the 2003 U.S.-led war against the Iraqi regime of Saddam Hussein, has identified “vivid parallels” between Syria and Spain.

“Analogies are never perfect,” he wrote last October, “but as I have tracked this rebellion, and read and reflected on it, thoughts of the Spanish civil war have come to mind. The rancid hatred and mercilessness that separates the warring camps in Syria is evocative of that quality of hatred that played out in Spain.”

He also suggested that lack of outside support had helped drive Syrian rebels to identify with Islam. “They invoke Allah more often than they did at the beginning of their struggle ” which is perhaps an accurate reading of their solitude in the world of nations.”

Others have dismissed the parallels with Spain. Daniel Larison, in a riposte to Mr. Rubin in The American Conservative a year ago, rejected “lazy 1930s references when making arguments for taking sides in another country’s civil war.”

“Even if we accept the comparison for the sake of argument,” he wrote, “how is it in the U.S. interest to back the weaker side?”

Jeremy Salt, a Turkish-based historian, turned the Spanish analogy on its head in an article in The Palestine Chronicle last October in which he criticized Mr. Ajami.

The true parallel with Spain, he wrote, was “the determination of the German national socialists and Italian fascists in the 1930s and of the combination of ”liberal democracies” and gulf autocracies in 2011-12 to destroy a government standing in the way of their strategic interests.”

The parallels between the two conflicts have not been overlooked in Spain itself.

Juan Goytisolo, an award-winning Spanish writer who was a child during the Spanish war, has written of the moral blindness of non-interventionist powers such as Britain and France, whose policies of appeasement in the 1930s had been as ineffective as they were disastrous in their failure to avert a wider war.

As for Syria, “the daily martyrdom of the Syrian people does not allow the international community to sit with its arms crossed,” he wrote in Spain’s El Pa­s this month.

Citing the contradictory statements of Western leaders, and eternal debates in what he calls the “useless and discredited” United Nations Security Council, he said history was repeating itself and “brute force is confronting the ethics and human rights theoretically defended by our fragile and faint-hearted democracies.”

Is it right to use historical parallels to justify present-day policies? And, if so, do the lessons of the Spanish civil war provide an argument for intervening in Syria? Let us know your views.

Does Spain’s History Provide a Lesson in Syria’s Civil War?

What Will Happen to Syria’s Weapons?
Syria’s Gas Attack on Civilization
The Mother of All Stalemates in Syrian Civil War
Opinions 1017 Syrian Revolution 1335