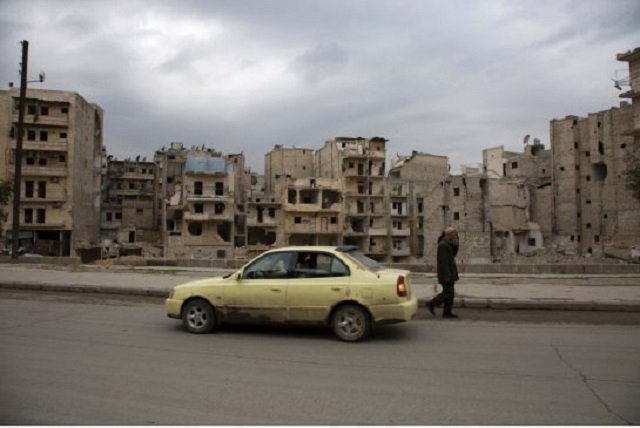 Syria has lost $368 billion since civil war broke out

March 8, 2016 9:37 pm 0
The SNC Unpopularity is Growing
The Rebels Are Gaining Ground in Syria
Are Syrians Being Traded for PKK Terrorists?

Source: The Star – by Stefanie Levitz (Syria has lost $368 billion since civil war broke out)

World Vision estimated the number by also taking stock of the loss of human capital as country’s educated flee the country.

Syrian activist Elias Sadkni remembers walking through the main markets of the Syrian city Aleppo, looking at stalls that had been there hundreds of years.

Over the last five years of the Syrian civil war, many of those stalls have been bombed and burned and their owners are now long gone.

A World Vision study released Tuesday estimates the Syrian economy has lost $368 billion since the war broke out, measured by taking stock not just of the markets destroyed, but the loss of human capital as well.

Sadkni, 31, says all of his childhood friends have now fled the country.

So has he, having first tried to come to Canada in 2010 as a skilled worker. Delays with his application took him down a different route — a scholarship to a U.K. university that he’s now putting to work running a non-governmental organization for Syrians in Lebanon.

It’s estimated that half of Syria’s doctors have left. One out of every four schools has been destroyed or is now being used for shelter. Thousands of teachers are gone, too.

“This is a loss thast will never be reversed,” Sadkni said of the flight of Syria’s most educated.

“People who are leaving to find a better life in Europe or in Canada, when they settle down with their families, their kids in schools, I doubt that they will come back to Syria soon.”

Peace talks are scheduled to resume in Geneva this week aimed at ending the war.

The World Vision report estimated the cost of the conflict by looking at what Syria’s economic growth most likely would have been had the war never broken out.

The amount lost is equivalent to six times of what Canada spends each year on primary and secondary education, said Michael Messenger, president of World Vision Canada.

“If we as an international community don’t reach peace, we are denying the children of Syria the opportunity for a prosperous future for likely at least a generation,” he said.

Syria has lost $368 billion since civil war broke out

Where Are the Sanctions Against Russia for Invading Syria?
Putin is serious about entering Syria — and not to go after ISIS
Salute the Alawites Revolting Against Assad
Syria News 1170 Syrian Revolution 1350