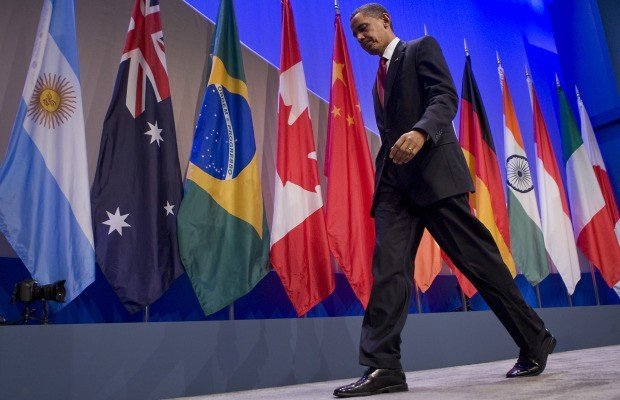 Just do the opposite

July 5, 2014 8:33 am 0
Strategic Patience Nonsense Working For You Mr. President?
How Will Assad Be Held Accountable For Crimes Against Humanity?
Smearing Netanyahu Part Of White House Denying Reality

Is it safe to predict success in foreign and domestic policies on the premise of doing exactly the opposite of what Barack Obama wants to do? At this point, I would say yes. Given his record, we may still have the chance to save this great nation from a disastrous presidency if we simply follow this logical rule.

His latest misstep on Syria should be of concern to us. The President is asking Congress to fund the moderate Syrian opposition to the tune of $500m to shield Assad from the Jihadists. It is not enough that Assad concentrates immense resources to kill the moderates that could replace him, but our President is coming to his aid to finish them off.

If the President is able to fund the vetted moderates, Syria will become a hotbed of an endless supply of Jihadists on one side and Iranian terrorists and Syrian mass murders on the other. All the moderates will perish because of Obama?s loony politics.

Have you ever seen a YouTube video of a Jihadist shaving his beard off to declare himself a moderate? The supply of vetted Syrian oppositionists is limited and Obama is embarking on an insane policy to obliterate all the moderates left.

By now, Assad must be thinking who his best ally is. Is it Khamenei arming and funding his regime of terror or Obama behaving idiotically?

Grant you, we cannot wave off the danger the extremists represent against the minority communities in Syria or elsewhere. Protecting the minorities falls on our shoulders.

The solution to Syria, at this point, is one of two strategies, none of which Obama is even considering. Either sideline the vetted moderates to rule one day after Assad, and develop a plan to protect the civilian minorities from the onslaught of the extremists without aiding the Assad forces, or permit NATO to weaken Assad to negotiate a settlement and battle the extremists of IS simultaneously.

In other words, either we let Assad, al-Maliki, and Khamenei deal with the Jihadists they created through their actions or we control all of them.

Under the first scenario, Syria would no longer be our problem. What could be better than to watch the Assad killers, the IRGC terrorists, and the Hezbollah thugs battle the Jihadist Caliphmongers until they all expire on the battlefield?

Under the second scenario, we should reject Obama?s request for funding the Syrian moderates. We should certainly help them stay out of the way while IS battles the Assad forces.

The meltdown overseas is reflected domestically as well. According?to Jennifer Rubin of the Washington Post, the rhetoric of the President has been reduced to ?schoolyard taunts? against all his opponents. Think about it, Obama, with all the scandals at home and all the fires he ignored or caused overseas, he still finds the energy to lash out against those who oppose him. One cannot help but ask, is this a grotesque arrogance or a sinister concoction?

Mind you, if Martin Luther King had a dream fighting for civil rights, judging from Obama?s behavior, he is having a nightmare protecting his legacy. For historians, the difference between President Reagan and President Obama is that the former was a great leader who communicated well and the latter is a communicator who cannot lead and, to boot, he is possessed by the politics of the sixties pretty much endorsed by all of America?s enemies. These facts go unnoticed in the psyche of most Americans.

It seems that no matter what Barack Obama tries to accomplish, the results are disastrous. His two-term in office will probably be one of the most analyzed in US history and simultaneously the least commemorated. So far, it looks like he has learned nothing from his mistakes.

Syria, in particular, has demonstrated the deliberate wanton of his administration to ignore its responsibilities. Moreover, he almost did not go after Bin Laden, and had he done that, this President would be looking like a big star basketball player who has yet to score a basket after five seasons. He did score one basket though, which is why the latest Quinnipiac University poll?shows?him as the worst US President since WWII.

Now, many more know what many of us knew all along: Barack Obama is a dud.

I urge the leadership in the House of Representatives to deny Mr. Obama his request. We have no choice now but to pressure our President into carrying out the responsibilities of the Office by letting the extremists battle each other.

For the isolationists, like Senator Rand Paul, you need to watch carefully, before you hit the airwaves, the results of Obama?s foreign policy global masterpiece that one day may come back to bite us in the a**. Ask yourself, do we want the US to prevent fires or scurry around putting them out everywhere?

I am particularly irked that loyal allies, like Israel and the Gulf countries, are asking if they can ever rely on the US again and, unquestionably, I think this is shameful.

Saving whatever is left of Syria for Assad is as senseless a goal as ever conceived by this President and his inept advisors. Can someone please turn the lights on at the White House?

Meanwhile, adopt this new habit if you work on the Hill, just do the opposite of what Obama wants to do and all will be well.

Why Are We Intolerant of Weak Presidents?
Assad to Syrians is what AQ is to America
Worst US President ever
Slippery Barack Obama 976