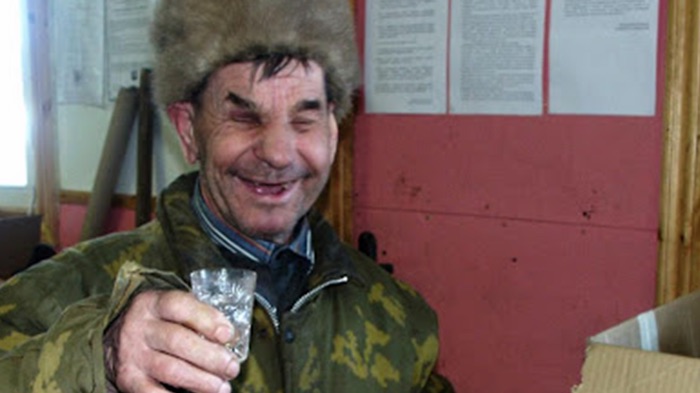 March 28, 2020 4:35 am 0
After East Ghouta and Idlib Comes Israel
The Ambassador From Hell?
Condemning Putin Makes Him Stronger Domestically

Falafel, the super Syrian journalist, could not resist to find out the forces behind this great amendment. So, he flew to Moscow, with a live chicken in his carry-on to look as authentic as possible, to interview the genius behind the idea.

After a week of research, Falafel was able to find the name of the brilliant man behind it. He is a veteran retired pilot who served in Syria with the distinction of having earned the most medals ever accorded to a pilot in Russian history. Even more than Yuri Gagarin.

The hero’s name is Sergey Cocktailov. Falafel found him under a bridge cleaning his hand-me-down tent.

Falafel: Thank you for granting me the interview.

Falafel: I understand from my research that your proposed idea of a Russian Constitutional Amendment for free Vodka for every Russian is gaining such momentum even the Duma is supporting it fully.

Cocktailov: Did you bring any Vodka with you?

Falafel: As a matter of fact, I did.

Falafel hands him a shiny large bottle. Cocktailov glues his lips to its bore swallowing the cheap booze with his eyes lit with delight. Falafel continues the interview as fast as he could knowing the man might collapse any minute.

Falafel: How did you come up with the idea Mr. Cocktailov?

Cocktailov: How? Because free Vodka in Russia is about human rights.

Falafel: How long did you serve in Syria?

Cocktailov: You asked me how long and I said until I bombed 200 hospitals.

MOMENTUM FOR the RUSSIAN CONSTITUTIONAL AMENDMENT TO PROVIDE FREE VODKA

Falafel: How would you describe your tour in Syria?

Cocktailov: I don’t want to talk about it.

Falafel: Does it bother you that you killed innocent women and children?

Cocktailov (now getting angry): I said I don’t want to talk about it!!!

Falafel: How did your idea for free Vodka gain so much momentum?

Cocktailov (after a hiccup): My mother, God bless her heart.

Cocktailov (another hiccup): She drew a hand written sign and walked Red Square every day asking people for free Vodka for her son. (Hiccup) Not everyone had money, so that’s how. (Hiccup) If Putin wants to be emperor of Russia, then by golly … we want free Vodka for life in return. It’s our right.

Falafel: If the constitution is amended, this will make you a hero. Again.

Cocktailov: Hero to everyone but the dead Syrian children.

Falafel: Don’t be hard on yourself, you were following orders from above. Way above.

Cocktailov: I have a gift for you too.

Captain Cocktailov disappears in his tiny tent and comes out with a big heavy bucket held with two hands.

Cocktailov: These are the medals I earned for bombing Syrian hospitals. Take one. Any one you like.