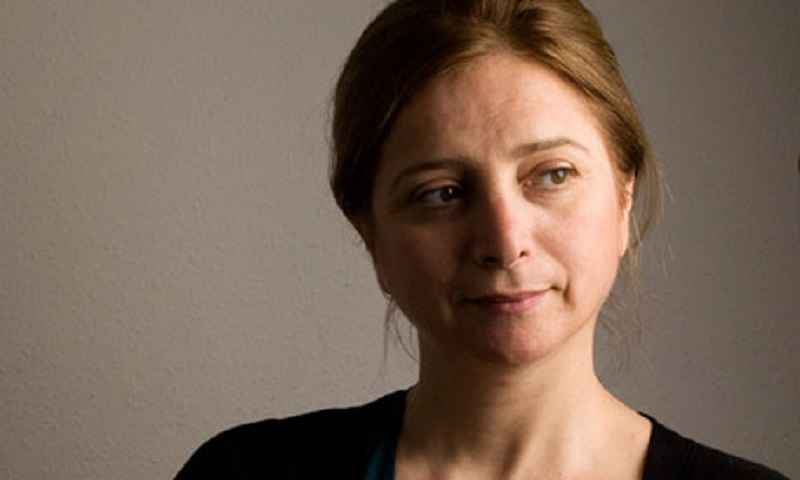 One Should Learn from Samar Yazbek

September 20, 2012 8:36 am 0
Sexual Abuse and Torture of Women in Assad’s Prisons
Barbarism Comes in Words Too, N’est Ce Pas Joshua Landis?
The Face, The Muscle, and the Brain

Once in a while, one reads an article that holds the truth above all else but also has the realism and pragmatism of the most hardened of political views. Such is Trudy Rubin’s piece on Samar Yabzek, a Syrian Alawite who has a good grasp of who Assad is and how much harm his regime is causing Syrians, including all non-Muslims in Syria. One should learn from Samar Yazbek.

This article creates a wedge between extremists be it religious or secularist many Syrians wish it to happen. Samar Yazbek is the future of Syria we all want. This is why one should learn from Samar Yazbek.

The talk in Washington is that last week’s Mideast violence will cement President Obama’s reluctance to intervene militarily in Syria.

After all, the demonstrations in Libya and Egypt, etc., were orchestrated by radical Islamists – empowered by the fall of dictators and the emergence of Arab democracies. So why should Obama help Syrian rebels oust dictator Bashar al-Assad if his fall may produce a similar result?

The answer: If Obama doesn’t help Syrian rebels now, the outcome will be far worse for America, and the entire region. Indeed, Libya should make U.S. help for Syrian rebels more urgent, not less.

This argument is made compellingly by a courageous Syrian writer, Samar Yazbek, who visited Philadelphia this week to discuss her newly published memoir, A Woman in the Crossfire: Diaries of the Syrian Revolution.

Yazbek risked her life to document how peaceful protests turned into armed rebellion. An educated, secular woman, with flowing blond hair, she traveled in disguise to watch as unarmed demonstrators were attacked by regime snipers and militias, and whole towns were punished by artillery bombardments.

Yazbek belongs to Syria’s minority Alawite (Shiite) sect, the religion of the ruling Assad clan along with most of the military and security elite. She is considered a traitor for her activism, and was repeatedly hauled in for interrogation. She was made to view the bloodied bodies of young prisoners mutilated by horrifying torture. She agonized constantly that the regime might harm her teenage daughter.

Her life was probably saved by the fact that the murder of a well-known Alawite writer would have undercut the false regime narrative that the rebels were all Sunni religious fundamentalists. As Yazbek’s book shows, that isn’t true.

Early in the revolt, many ordinary Syrians were inspired by the uprisings in Tunisia and Egypt to protest against the Assad regime’s repression and corruption. The regime’s violent response led groups of defecting soldiers and ordinary citizens to form militias to protect their towns.

The rise of more radical fighting groups was “a reaction to the regime’s violence,” says Yazbek. “They aren’t representative of [all] these militias, but if the regime continues, this will lead to more religious radicalism from the people.”

Yazbek describes how Assad is deliberately provoking sectarianism and religious radicalism: He seeks to frighten minorities and moderate Sunnis into believing they must support him. Regime thugs, known as shabiha, move around the country spreading rumors amongst Alawites that Sunnis are coming to rape and kill them – and vice versa. Their aim is to goad one sect to fight the other, in a sectarian war that will spread across Syria’s borders.

Yazbek was told by an Alawite member of the security services that “Assad won’t leave power before Syria is destroyed.”

This brings us to the issue of Obama’s policy toward Syria. The administration has called for Assad to leave power but has done little to expedite his departure. Understandably, the White House doesn’t want to get involved in another Mideast war.

However, the longer the Syrian fighting goes on, the worse the likely outcome. For months, the White House clung to the unfounded hope that Moscow would abandon its support for its last Mideast ally. It also tried fruitlessly to get exiled Syrian activists to agree on a leadership that the West could recognize.

Yet the future Syrian leaders who matter are those leading the militias that are fighting on the ground.

U.S. officials only belatedly started talking, in a limited way, to some of these militia leaders. “We know very little about the armed opposition,” says Syria expert Andrew Tabler, a fellow at the Washington Institute for Near East Policy, who just returned from a month spent talking to Syrian rebel leaders along the Turkish border.

When it comes to helping Syrian fighters with weapons, the administration has outsourced that task to Gulf countries. The result: Gulf money and arms are flowing to Islamist groups and hard-line Salafis, while non-Islamist militias go begging for weapons and communications equipment. This makes more likely the result that everyone fears.

What to do? Tabler says the administration should be making a massive effort to “directly track and engage with Syrian armed groups and see whom we could work with.” If we can identify such groups, he believes we should supply them with “what they need.”

That might be ground-to-air weapons that could shoot down the planes that are bombing civilians in Syrian cities. This wouldn’t end the conflict but might turn the corner and convince some key Assad supporters that he can’t last.

Yes, there are risks involved, and some weapons could get into the wrong hands. Yes, Assad’s fall would probably mean some Islamists will play a key role in a successor democracy. But if we stay aloof, and outsource Syria policy, radical Salafis will gain strength along with an influx of Arab jihadis. And U.S. influence in post-Assad Damascus will be nil.

As for a possible diplomatic solution, only if Moscow perceives Obama to be serious might it join in a regional formula to stabilize a post-Assad Syria (leaving Iran, Assad’s strongest ally, isolated).

Samar Yazbek knows she could face difficulties as a secular woman under a post-Assad government. She is still adamant that Washington should help the non-Islamist militias with weapons. “What happened in Libya must force the West to help Syria so that religious radicalism won’t spread,” Yazbek says. I agree.

One Should Learn from Samar Yazbek

With Assad in power, Syria will never know peace
Fighting Traps 200 Civilians Inside Mosque In Qaboun
Are We on the Brink of Assad’s Final Days?
Assad Must Go 101 Opinions 1017 Syrian Revolution 1335