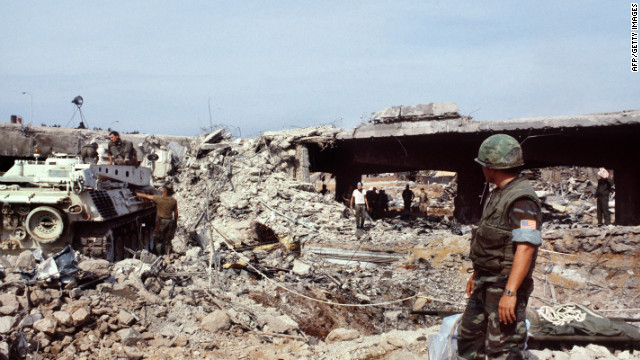 The Thuggery of Hezbollah is Pure Evil

In defending the thuggery of Hezbollah, one of their MP said: “The Resistance is much too noble, pure, and honest for anyone to harm it, its dignity, people, and martyrs”.

For goodness sake, Hezbollah is run by murderers and thugs. They kill and terrorize at will hiding behind a religious robe and holding themselves accountable only to G*d (Who has been absent ever since we found out he existed); but they also speak of purity, honor, and nobility.

Hezbollah killed Prime Minister Rafik al-Hariri. A man full of goodness in his heart. When Hezbollah was training its youth in how to kill, Hariri was sending Lebanese youths to study abroad. On his own personal dime. Rafik al-Hariri was a giant of a man, Hassan Nasrallah is a sick asshole.

The thuggery of Hezbollah knows no bounds and no limits.

They, with Syria’s Assads, were responsible for killing, since the seventies, some of Syria and Lebanon’s best and most talented politicians but when anyone tries to hold them accountable, they threaten with more violence. This can’t be happening in the 21st century.

TERROR AGAINST US TROOPS

In 1983, Hezbollah killed 241 U.S Marines in one of the worst terror attack ever against US troops stationed overseas. Their terror also killed 58 French military personnel. Go talk to these families about the nobility and purity of your terror.

Any wonder our caves are still dark and the men occupying them are simple-minded Neanderthals? We just pity the Israelis who left 2,000 years ago to come back to see the same people with the same mental capacities are still running these lands.

Any wonder Israel is armed to the teeth? Even when its scientists win Nobel Prizes with inventions that advance human endeavors? What did Hezbollah scientists achieve? The terrorists in Hezbollah immediately marshal their best and brightest to terrorize the innocent.

It seems we Arabs still live as if it is year 1, every year. We have no idea how to advance, only how to kill.

The Thuggery of Hezbollah is Pure Evil