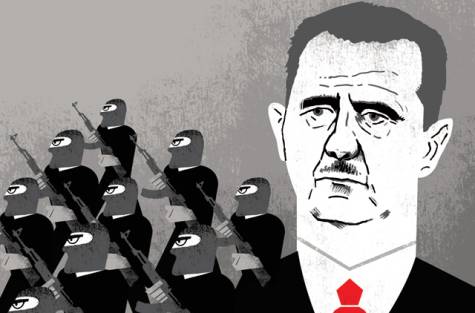 The State Department confirms Assad fostered ISIL. To deflect from the direct and serious accusation former Secretary of State Hillary Clinton leveled against the Obama Administration on its Syria policy, Marie Harf, spokesperson for the US State Department, accused directly today the Assad regime of fostering ISIL by protecting them and helping them move into Iraq. Her words were:

.. the Assad regime played a key role in ISIL’s rise. They allowed for a security situation where ISIL could grow in strength. The Syrian regime fostered the growth of terrorist networks; they facilitated the flow of al-Qaida foreign fighters .. during the Iraq conflict specifically, the regime certainly has been aware and encouraged violent extremists’ transit through Syria to enter Iraq. So the regime has had a long history of helping these kind of terrorists foment unrest in Iraq. So that’s not something new or, certainly, unfortunately, confined to this conflict.

The fact the US State Department confirms Assad fostered ISIL is extraordinary in and by itself. Up until now, the Obama Administration has dodged such direct confrontational rhetoric to avoid stoking Syria and its fires since removing Assad from power was never part of Obama’s agenda.

Secretary Clinton helped Obama to admit what almost everyone knew and everyone ignored: Assad fostered ISIL. Assad released hardcore Islamists from his prisons, armed them, and gave them the latitude to become strong. Assad even purchased oil from ISIL after he allowed them to occupy his oil fields.

Why would Assad strengthen ISIL? He did it just so the West feels threatened by ISIL and dispatches their own jet fighters and drones to fight his battles for him and to ignore any calls for his removal; all the while ISIL is killing his enemies and our friends in the Free Syrian Army and the Kurdish people. Such deceptions lend credence to ?Better the devil we know? mantra some Israelis invented. Assad keeps threatening Israel with Hamas and ISIS and still some Israeli policy makers find every excuse on this planet to shore him up.

It is not about Alawism, stupid. It is about US interests and those of our allies, about right from wrong, and about solving problems without violence. When the State Department confirms Assad fostered ISIL, it is telling us terror has no face, no religion, and no color.

While Assad ignored ISIL and accorded the terrorist organization the time and the space to become a threat against US interests, he was gassing and bombing helpless women and children with deadly barrel bombs. Tell me this is a man we should not haul to The Hague as soon as possible.

Assad has instigated ISIL to battle the tribes, the Kurds, Jabhat al-Nusra, and the Free Syrian Army on his behalf before dispatching them to Iraq. Once in Iraq, Tehran used its vast influence in Washington to direct the White House to use military force against ISIL; after Iraq, Khamenei would convince Obama to engage ISIL in Syria once they finish Assad?s enemies off. The story ends with the US helping the terrorist who grows terror. How do you like that story Bill O?Reilly?

Meanwhile, Obama and his brilliant team of foreign policy experts are still debating whether to provide the moderates, in the Free Syrian Army, weapons to battle the Assad regime. To me, watching how the White House operates is like watching the Mullahs dictate their own policies. There is little difference between the two. The White House is like a little Tehran.

Have you noticed how Obama is always one-step behind on foreign policy matters due to his ideological disposition, lack of experience, and lack of understanding of the Machiavellian ruses of our enemies? Whether we are talking Putin, Assad, or Khamenei, Obama is their dream comes true.

No one can convince me that Assad is not a present and clear danger to US interests. Obama should have removed him from power when he had the chance and dragged his a** to The Hague to face justice for his crimes against humanity. The American people simply do not realize the threat the Assad regime poses for the US because Obama never bothered to make that case. Now, it is biting him hard.

Do you think Obama will do something about it now that his administration admitted Assad is behind ISIL? Maybe, if he can manage to forget the image of a shirtless Putin.