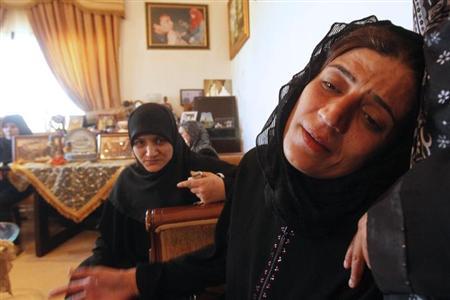 July 17, 2013 8:50 am 0
The Jihadists Defeat Assad, We Defeat the Jihadists
Falafel East Wing Story About Barack and Valerie
Is Obama Looking Forward to Target Syria with Drones?

Suspected rebel gunmen assassinated a well-known supporter of Syria’s psychopath Baschar al-Assad in Lebanon on Wednesday, the latest sign that Syria’s civil war is spreading to its smaller neighbor. The gunmen kill pro-Assad figure in Lebanon, which is rare.

Mohammad Darra Jamo, a commentator who worked for Syrian state media and often appeared on Arab TV channels to press Assad’s cause, was riddled with bullets by gunmen at home in the southern town of Sarafand, Lebanese security sources said.

It was the first assassination of a pro-Assad figure in Lebanon since Syria’s conflict started more than two years ago and follows a series of attacks in recent weeks against the Lebanese Shi’ite group Hezbollah, which has thrown its weight behind Assad on the battlefield in Syria.

Lebanon, whose own 15-year civil war ended in 1990, is struggling to stay on the sidelines of Syria’s conflict. Car bombs and clashes between groups supporting opposite sides of Syria’s war have become increasingly common.

Syrian state media blamed an “armed terrorist group” for the killing which took place at around 2 a.m. (7 p.m. ET Tuesday).

Lebanese security sources said supporters of the Syrian rebel opposition were top suspects in the killing in a Shi’ite area of southern Lebanon, where security is normally tight.

Syria’s Sunni Muslim rebels have threatened to take the war across the border following the involvement of Lebanese Shi’ite fighters from Hezbollah in Syria in support of Assad, a member of the Alawite sect that is a branch of Shi’ite Islam.

After two years of gains in Syria’s civil war, forces loyal to Assad have been making ground, while rebel groups have been plagued by infighting between Islamist fighters and the more liberal Free Syrian Army.

Jamo’s wife, who was with him during the attack but not harmed, said on Hezbollah TV that officials from Syria’s ruling Baath party had called her husband on Tuesday and warned him to be careful.

That call came on the day a Hezbollah security official was killed and two wounded when a convoy of vehicles heading to Syria from Lebanon was subjected to a bomb and gun ambush.

Jamo, 48, a Syrian Kurd who lived in Sarafand for 20 years, appeared regularly on Hezbollah TV and radio broadcasts. The attack in the Shi’ite town shows anti-Assad groups can hit targets far from Sunni areas where they have the most support.

Last week a car bomb injured more than 50 people in a southern Beirut suburb controlled by Hezbollah, one of Lebanon’s most powerful political and military forces. In late May, rockets were fired at a Hezbollah area of southern Beirut.