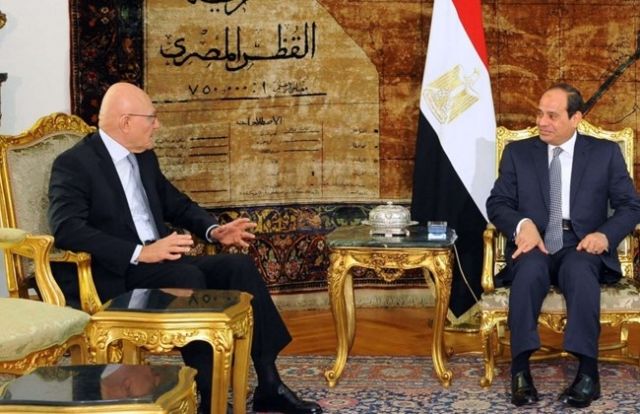 Sisi to Lebanese: Prepare for Fall of Assad

Source: The Daily News (Sisi to Lebanese: Prepare for Fall of Assad)

“Be ready for the fall of Assad,” an anonymous member of the delegation quoted Sisi as saying.

The Egyptian president warned “of dramatic developments that could suddenly hit Syria,” saying that the regime is in “bad shape” as evidenced by the latest military developments on the ground, the Lebanese daily reported.

Sisi acknowledged that any dramatic shift in Syria resulting from Assad’s removal from power could lead to further pressure on Lebanon, especially with regards to a potential increase in the number of Syrian refugees fleeing the neighboring conflict.

“Therefore, Lebanon should endeavor to fortify itself and start anticipating how it would deal with such a possibility,” the source quoted Sisi as saying.

Prime Minister Tammam Salam launched a series of meetings with top officials in Cairo Wednesday, including his Egyptian counterpart Prime Minister Ibrahim Mahlab and Sisi, as part of his one day visit to the country.

Salam’s talks with Sisi covered developments in the region, including the war in Syria and helping Lebanon cope with its repercussions, particularly the presence of more than a million Syrian refugees, the state-run National News Agency reported.

During the meeting with Salam, which was also attended by Mahlab, Sisi stressed Egypt’s position, which advocates a political solution to the Syrian crisis with the priority of preserving the Syrian state, the NNA said.

The report added that the talks also touched on the Lebanese presidential election crisis, with Sisi again calling for the election of a president as soon as possible in order to achieve stability in Lebanon.

Sisi to Lebanese: Prepare for Fall of Assad