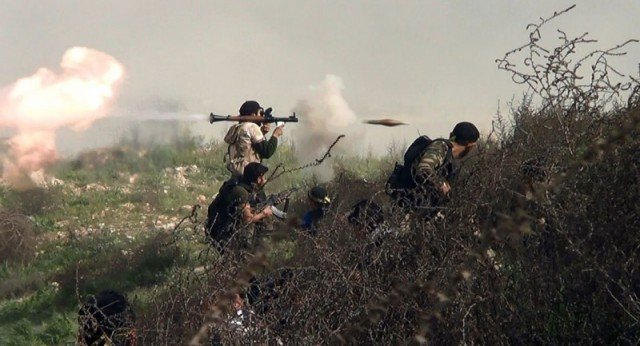 Saving Syria Is No Fantasy

August 12, 2014 8:44 am 0
Expansionist Iran no more
Syria’s Future: Alawite Military Coup, or Regional Civil War
Message to the CIA: When the Attack Dog is at Your Throat, Don’t Fiddle with his Cage Key

In June 2014, the Obama administration asked Congress for $500 million to train and equip nationalist Syrian rebels battling both the Islamic State in Iraq and the Levant (ISIL) and the Assad regime. Questions were posed then about the genuineness of the gesture: The request was emailed to Capitol Hill rather than made in person; it was unaccompanied by visits or telephone calls; there were no follow-up consultations; there was no order to the Department of Defense to reprogram funds to initiate activity quickly; and there was no evidence of an existing plan or overall strategy. Two months later, those questions seem to have been answered by the president of the United States. He says that arming nationalist Syrian rebels was never going to work anyway.

In?an interview?with the?New York Times?on Aug. 8, President Obama said the notion that ISIL?s rise could have been stopped or hindered if he had armed the secular, more Western-friendly Syrian rebels at the start of the civil war?a view recently endorsed?by his former secretary of state, Hillary Clinton??has always been a fantasy. This idea that we could provide some light arms or even more sophisticated arms to what was essentially an opposition made up of former doctors, farmers, pharmacists and so forth, and that they were going to be able to battle not only a well-armed state but also a well-armed state backed by Russia, backed by Iran, a battle-hardened Hezbollah, that was never in the cards.??

Ironically, in the same interview the president also defended the U.S.-supported NATO military intervention in Libya on the grounds that without it, ?it?s likely that Libya would be Syria.? One wonders if Syria itself would ?be Syria? had its armed nationalists been adequately supported since 2012 and had the Assad regime?s mass terror-delivery systems been neutralized in the summer of 2013 following the chemical-weapons atrocity, when more than 1,400 people were killed in an attack outside Damascus.

No doubt the president is sensitive to the charge that his rejection of the 2012 recommendation by his national security team to arm and equip nationalist Syrian rebels robustly has contributed significantly, if inadvertently, to ISIL?s growth in both Syria and Iraq. His comments to Friedman implicitly dismiss the 2012 recommendation itself as a fantasy, but as Secretary Clinton?s Syria adviser I was a member of the administration at that time. The recommendation, in one form or another, was offered not only by Clinton, but by Secretary of Defense Leon Panetta, CIA Director David Petraeus and Chairman of the Joint Chiefs Gen. Martin Dempsey. Yet the president, ignoring decades of universal conscription and mandatory military service in Syria, persists in characterizing the Assad regime?s armed opponents as a hopeless collection of former butchers, bakers and candlestick makers.

What is truly curious, however, is the request to Congress for $500 million to finance what the president deems a fantasy. Indeed, if press reports are true that the United States is already involved in some low-level arming, equipping and training of Syrian rebels, one wonders how many taxpayer dollars have already been spent on something the commander-in-chief deems illusory. What is Congress now to make of this $500 million request? What are military planners at the U.S. Central Command to make of the midnight oil they have been burning trying to give shape to something they thought was real? What exactly was the purpose of whatever interagency process produced the $500 million initiative in the first place?

Perhaps the president misspoke or was inaccurately quoted. Perhaps he meant to argue that his 2012 decision was correct, but that the rise of ISIL has been a game-changer, and this is why he is seeking $500 million from Congress: to accelerate, despite all of the difficulties, the development of an alternative to Assad and the jihadis. Perhaps he really meant only to repeat his customary straw-man argument: Those who claim Assad would be gone today if only a different decision had been made in 2012 are wrong. One prays this is the case.

Congress, mercifully in recess, now has a choice: Take the president literally and summarily reject the $500 million request; or give the president the benefit of the doubt as to his choice of words and deliver the kind of serious consideration the request merits. It should choose the latter. When it returns to session it should invite senior administration officials to testify about the national security objectives and strategy motivating the request. Obama, for his part, should move quickly to clarify his remarks to convey that he is not asking Congress to throw money at a policy he doesn?t believe in.

American pilots are now engaging ISIL targets in northern Iraq to support Kurdish peshmerga warriors. Syrian nationalists battling ISIL next door have long since given up on getting that kind of direct combat support from the United States. In the past, President Obama?s words about a dictator who should step aside and red lines that are not to be crossed encouraged the Syrian opposition to believe that the United States would not permit Iranian and Russian support for mass homicide to go unanswered. They have grown deeply disappointed, disillusioned and embittered. Yet they have held out against steep odds. Evidently, they never got the memo about successful resistance not being in the cards.

These people do not, in their dire straits, need a presidential back-of-the-hand, even one that may not have been meant as such. They need help in their two-way fight: help in downing regime helicopters bearing barrel bombs dropped indiscriminately on civilians, and help in repulsing and expelling the jihadis? terror squads. Had the requisite assistance started flowing two years ago, both Syria and Iraq would be in better places now.

Fantasy? Few in the administration?including at very senior levels?think so. But the president has the only vote that counts. And what he does now?not what he did or failed to do two years ago?is what truly matters.