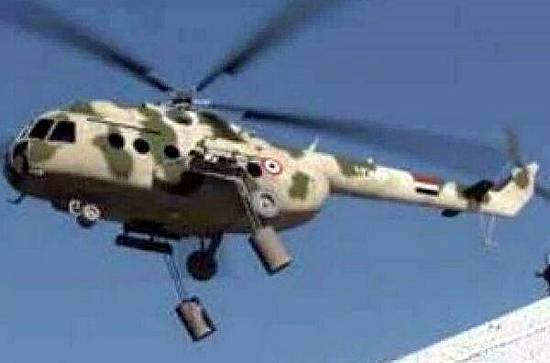 August 11, 2014 11:06 am 0
How Israeli Drumbeat is Saving Syrians
Heartbreaking Scenes Witnessed in Starving Madaya Courtesy of Hezbollah
Pompeo Warns Assad Against Use of Chemical Weapons

UN Security Council Resolution 2139 of February 22, 2014, ordered all parties to the conflict in Syria to end the discriminate use of barrel bombs and other weapons in populated areas. In spite of that, both the Syrian and the Iraqi governments continue using them against civilians. Human rights groups have characterized them as weapons of terror and illegal under international conventions.

Barrel bombs are a type of improvised explosive device (IED) sometimes described as ?flying IED? typically made from a barrel that has been filled with high explosives, shrapnel, oil and chemicals and then dropped from a plane or a helicopter. They are cheap to produce, so they are used extensively in ongoing conflicts such as Syria and Iraq. Because different explosives can fit into them, and due to their poor accuracy and indiscriminate use in civilian areas they provoke devastating effects and loss of lives.

The earlier use of these bombs was in South Sudan in the 1990s, where they were expelled from transport planes. Since then, they are now being extensively used by the Syrian Air Force and by the Iraqi government forces, as happened during the Anbar clashes (2013-2014.)

?What is happening now in Iraq definitely started in Syria. If I were al-Maliki, and seeing Assad next door using the same tactics without a slap on the wrist and gaining ground as a result, it stands to reason he would say, ?Why the hell not??? said Erin Evers of Human Rights Watch.

Residents of Tikrit, Baiji and Mosul report also that government forces dropped barrel bombs on their cities during the 2014 Northern Iraq offensive, as they also did later in July in Fallujah and the nearby town of Al-Karmath.

Barrel bombs use in Syria was first identified in August 2012. Although a Russian military expert initially denied its existence, an October 2012 video clearly showed a barrel bomb being lit and dropped by Syrian Air Force personnel. It is estimated that between 5,000 and 6,000 barrel bombs have been used and that more than 20,000 people have been killed by them since the conflict in Syria began in March 2011.

Since that resolution was passed until July 14, 2014, Human Rights Watch identified over 650 new major strikes in Aleppo neighborhoods held by groups opposing the government. According to statistics from the Violations Documentation Center, aerial bomb attacks killed 1,655 civilians in the Aleppo governorate between February 22 and July 22, 2014.

Area bombing or carpet bombing, where conventional shells are used to bombard a large are from the air ? a practice widely used during Second World War- was banned by the 1977 Additional Protocol I to the Geneva Convention. The Geneva Conventions of 1949 are still considered the cornerstone of contemporary humanitarian law.

Additional Protocol I relates to the protection of victims of international armed conflicts. According to this Protocol, it is not lawful to treat a whole city as a target simply because it contained a number of separate military targets within it. These kinds of actions also violate the principles established in the Rome Statute of the International Criminal Court regarding the protection of civilians in combat zones.

UN Secretary-General Ban Ki-moon has been extremely critical of the use of weapons that increasingly kill innocent civilians and continue to fuel the conflict. ?Further escalation of violence will only serve the agenda of those who see military means as the only way forward, at the expense of the Syrian people, who have suffered enough already,? he said referring to the war in Syria.

Dr. Cesar Chelala?is a winner of an Overseas Press Club of America award.